I've played the level through almost to the end a few times by now. With every attempt I learn something new about the enemy movements, or the location of useful items, hiding places, and vents. There is something soothing and old school about watching and learning enemy patterns in a stealth game. Of course, in Hitman: Absolution the player is aided by the wall penetrating "instinct" ability (unless you're trying your hands with purist mode, which is not for the faint at heart).

This particular level is played out in a orphange roughly a third into the game. Agent 47 has gone rogue and is attempting to save a young girl who shares a similar past to that of the artificially produced assassin. She's in the elevator, but the electricity is gone and I need to locate four fuses while the house is overrun with trigger happy thugs. Oh well, every game has a collect mission.

I bypass the first set of thugs as they are focused on abusing some poor old security, I could save, but that's not my problem. I slip downstairs and find the first fuse, next I sneak by a great hallway and find a vent. I crawl to the kitchen area and patiently wait for an intruder to leave and snatch the second fuse. I continue in the same direction and around the back corridor of the house into some sort of archive room where the third fuse is located. The thugs prod along their paths and all is well. I now make my way back to the kitchen and try to remain undetected. I failed here a couple of times. The cheap way of doing this would be to take out the guard quickly, crawl into the vent and wait for things to quiet down.

Up the backstairs and I find a guard leaning over the rail with his back to me, I sneak by for the final fuse, and I find a syringe in the same room and can't help myself from going back and throwing it in the back of the neck of the casually leaned back ruffian. Off to the fuse box, and the end of the mission cutscene starts rolling. It's one of my favourite missions in Hitman: Absolution, but there are plenty of great ones here, and plenty of variation to be had.

Hitman: Absolution is more of an action adventure, and less of a sandbox in some ways, even if there are sandbox elements to everything you do in Absolution. There are missions that are open in their design, but usually a mission consists of a few strung together sections leading you from one to the next. Some levels are purely there for narrative reasons, while others are there to break up the pacing. There are missions where you make use of the crowd, missions were disguises will get you by, missions where there are nice set pieces to put in motion, and missions that require a certain amount of brute force (or at least promote it), and naturally all these things blend and combine to a certain degree within missions. But somehow it all works together to create a cohesive and well paced whole that is sure to delight both veterans and newcomers to the series.

The story is a wild ride will have you rubbing elbows with a truly shady set of greedy and deprived characters. In fact most of the sideshow freaks outshine the true villains of the story - the agency that Agent 47 felt forced to turn on. Sure there are some sizeable plot holes to deal with, but if you just focus on the one liners and crude Tarantino-esque world of Hitman: Absolution you are sure to find enjoyment. If Quentin Tarantino were to put a line of dialogues about dogs doing the dirty in the backyard in one of his films, well then Hitman: Absolution has a couple of dogs making puppies behind a barbershop (that's actually in there).

The variation in environments is tremendous and you will find yourself in midst of both a marijuana plantation in a Chicago apartment and a corn crop in South Dakota, in a crowded Chinatown during the Chinese New Year's and some sort of research facility dedicated to creating exploding pigs. IO Interactive even took the time to include cameos by Kane and Lynch, and they are a perfect fit with the corrupt and seedy population of Hope, South Dakota. I won't spoil it, but for fans of Kane & Lynch it's a nice treat.

Beautiful graphics and some modernised and updated mechanics ensure that Hitman will turn heads. Instinct not only lets you see enemies through walls and see their paths, but it also allows for point shooting where you can target and lock on several enemies while the game is in slow motion. This is a bit of a last resort as it consumes your instinct, but it's nice to see Agent 47 taking a cue from Sam Fisher in this regard and it opens the game up a bit to players who lack a bit of patience. Hand-to-hand combat is handled by short quick time events, something that can be a bit annoying if you're facing two enemies and one of them gets into hand-to-hand range triggering the quick time event as the other enemy will continue to shoot at you. Anyway, once things are getting that messy you might as well restart at the latest checkpoint.

The checkpoints work a bit strangely in Hitman: Absolution. If there are checkpoints in a level, only the larger areas have checkpoints, then you must activate it, and what happens is that the previous part of the level is reset to its original state as far as enemies go. It's a compromise as I'm sure the developers felt that not having checkpoints in the longer levels would be too punishing for most players, but it also goes against some of the Hitman ethos that enemies respawn behind you.

The Hitman ethos is however, clearly present in the asynchronous multiplayer mode Contracts. Instead of adding some sort of deathmatch, or assassination mode, you simply compete over who the best assassin and making use of the sandbox IO provide you with. You create a contract simply by playing a mission and taking out your target(s) of choice in a specific manner (bonus points for wearing a specific outfit or using a specific method or weapon for example) - then your time and your actions are tallied up for a score. This contract can then be played by others around the world, to see who the best agent is for that particular kill. It must be said that not all levels lend themselves well to Contracts, but it's a nice idea and it's one that could really get the hardcore crowd going as it will most certainly bring about some strange and extremely difficult missions.

Having played other assassination games like Assassin's Creed III and Dishonored recently, Agent 47 feels a bit limited when it comes to his movements. Make no mistake, this is an old school stealth game, and while Agent 47 can climb ledges with ease (only designated ones) this is a game where you will find yourself crouched or in cover for the majority of the game. And in this regard it's closer to Deus Ex: Human Revolution in execution. Agent 47 can use objects he comes across to create distractions or as killing tools. Naturally things that make a lot of noise such as vases and bottles are great for distractions, but risk alerting nearby enemies when used for a kill. You will be alerted to enemies noticing you with an on screen prompt that works well enough, in disguise you will be noticed by others wearing the same uniform, but pressing down the instinct button helps you blend in.

Hitman: Absolution is the best game to come out of IO Interactive for quite a few years. It stays true to the franchise and provides us with a pleasant and suitably frustrating stealth experience, while modernising some of the mechanics to meet the demands of today's players. Fans of the old Hitman games will find a challenge in the higher difficulty settings, especially purist mode, a mode you really should only play after having learned all the ins and outs of the levels. There is plenty of delightful assassination to be had here, and even if its by no means perfect there are enough positives here for a strong endorsement.

We played the Xbox 360 version of Hitman: Absolution for this review, and while we did come across a couple of bugs (invisible enemies that appeared as floating guns in one spot), it was not enough to ruin the experience.

HQ
Gamereactor UK
+
+ Great sense of variation. + That old school stealth feel. + Some truly memorable characters. + Contracts mode is a nice addition. + Well suited for both veterans and newcomers.
-
- Some levels come across as a bit linear. - There are some holes in the plot and the main storyline feels a bit weak. - The occasional glitch and bug.
is our network score. What's yours? The network score is the average of every country's score 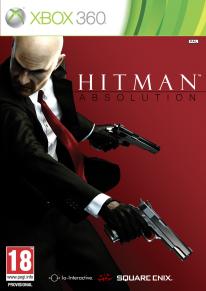