Four years have passed since Pikmin 3 landed on Wii U, as Nintendo finally brought us a new entry in the beloved series, a franchise that successfully debuted in 2001 on the Gamecube. With Hey! Pikmin - a new game for Nintendo 3DS - the Kyoto-based company has passed the torch to a new studio, Arzest, which now takes care of Capitan Olimar and the tiny colourful plant-like aliens, offering a fresh perspective on the well-worn concept.

To meet the portable nature of the platform, Hey! Pikmin has switched from being a tactical real-time game to a classic side-scrolling platformer, but the foundations introduced 16 years ago and its narrative theme are still there. Good ol' Captain Olimar has once again crashed his ship on a planet and to get home he has to collect a huge amount of Luminum (30,000 units, to be precise) in order to fix the spaceship. Fortunately, once again the Captain is aided by numerous Pikmin that, in addition to helping us to collect materials throughout the various levels (there are about 40 in total), help us to find secrets and collectibles (objects like toothpaste, clocks, magnets, and so on) which contain more Luminum to speed up our path towards escape.

Control-wise, it's extremely intuitive and fully consistent with the portable hardware. To move Olimar players use the left analog stick, while you can interact with the HUD and the game world using the stylus and touch-screen. The command screen is really minimal and there you can find the iconic whistle icon (which if pressed, allows you to summon the pikmin) and a jet-pack that allows Captain Olimar to reach otherwise inaccessible heights. Finally, to move the Pikmin to an object or to launch it against an enemy, just touch the object in question with the stylus and our loyal friends will be sent in that direction, before returning to your side automatically.

Each level contains up to three secret objects and 20 Pikmin to discover, hidden in the bushes and in other unlikely places and, like we said, you can call on them with your faithful whistle. The Pikmin that are saved at the end of each level - because, of course, along the way we encountered giant creatures who wanted to eat our tiny friends - are then sent to a special section called "Pikmin Park". Here, the small colourful aliens help to track down further Luminum in the various areas of the park.

As we progressed we came across different types of Pikmin, and as they did in the past, they have very different functions and purposes; blue Pikmin ideal for the aquatic sections, yellow ones let you reach higher levels and are resistant to electric shock, and so on. As for the level of difficulty, Hey! Pikmin is a rather simple and easily accessible game, especially to a younger audience, and finding hidden secrets or special items isn't particularly demanding.

Besides the main levels for each section (four levels and one boss level), there are also some bonus levels and some unlockable levels that you can only get with the use of some Amiibo. For example, we used the Captain Olimar Amiibo, and after solving a small puzzle, we were able to get more precious Luminum units. It doesn't seem to us to be a particularly impressive or an inventive use of the feature, especially since in order to gain access to those levels, the player has to buy the Amiibo (or borrow it), a choice that might be considered a little unfair, particularly because they allow us to unlock otherwise inaccessible Luminum.

What we appreciated most in terms of difficulty were the boss battles. The very first boss was pretty easy to defeat, but as we progressed through our adventure their level of difficulty rose gradually, providing something of a challenge that was missing elsewhere in the game. In terms of replayability, however, we weren't completely satisfied. The game lets you find different collectibles and all of the hidden objects on your first run through a level without too much trouble, and this takes away a bit of that sense of discovery which makes Nintendo's other handheld platformers (as is the case with Yoshi's Woolly World) more intriguing.

From a visual perspective, the game isn't brilliant. Although the level design is very varied and has truly unique features that reflect the nature of each world, the game isn't as polished as you'd expect. In short, we expected more attention and care in this area, especially in the light of other comparable titles for Nintendo 3DS.

Hey! Pikmin isn't exactly the game we expected after four years of waiting, as although it was both fun and enjoyable, it left us wanting more. The lack of a genuine challenge and the fact that it's not on par with other platformers from Nintendo impacted our experience, yet ultimately it's a game that fits well on the platform. We're looking forward to seeing something more in the near future. These are games that we've had a lot of fun with in the past, so maybe it's time for the series to make the Switch to console?

Gamereactor UK
+
Extremely intuitive gameplay, Mechanics with Pikmins are quite interesting, Varied and enjoyable soundtrack, Boss fights are fun, Varied and unique design level.
-
It's not overly hard nor challenging, We would have liked a more detailed game, Amiibo levels add no value, Levels are too similar to each other.
is our network score. What's yours? The network score is the average of every country's score

"Although it was both fun and enjoyable, it left us wanting more." 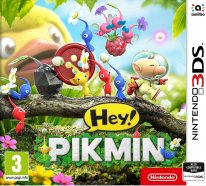