Hell Yeah! reminds me of Sonic the Hedgehog, but not in a way you'd expect. It reminds me of a feeling I once had, as a young boy sitting at a friend's house, watching him play on his Megadrive. It was the first time I'd seen the little blue hedgehog in action and I was mesmerised. All I wanted to do was barge my friend off the controller and play the game myself.

Hell Yeah! engenders the same kind of feelings that I had about Sega's mascot back when I was a youngling. Raw excitement. Pure fun. Undiluted escapism. These are the reasons we play video games.

Wrath of the Dead Rabbit is so exciting because it's built on foundations of fun. This is a silly, silly game, make no mistake. You take control of the titular dead rabbit and, in an effort to eradicate all evidence of an embarrassing incident involving a rubber duck and a bath, you head off to kill the 100 monsters who've seen the compromising pictures.

"The solution is just kill everyone."

It might sound like a stupid, ridiculous story; that's because it is. But then that is precisely why Hell Yeah! is so enticing. It doesn't shy away from itself, or try to be something that it's not, and it certainly doesn't take itself too seriously.

Rubber duck induced Hell slaughter wasn't the first premise that Arkedo came up with for their game. As Guermonprez explained, the first plot was eerily similar to that of another title, Death Spank. "We were in submarine mode. We were too busy making the bloody game. And after I showed them (Sega) I said "Hey, I have this great story about the Pants of Doom and a spank..." and they look at me like "you're kidding right?"

It was only later, when they sat down to play Death Spank that the penny really dropped. "Great, a new game by Hothead and a new game by... fuckin' hell; I stole Ron Gilbert's idea."

After returning to the drawing board a new plot was devised, even though story is secondary to entertainment in Hell Yeah! "It's a 2D platformer with too much of everything." That's a statement that can be interpreted as; crammed full of content and ideas. "It's the biggest project we've done so far, and maybe even for the future."

Arkedo are aiming for at least 12 hours of content from the first loop; an ambitious goal for a studio only ten strong. "The whole game was drawn by one single person. Every pixel you see is just one guy. I'm his biggest fan. I'm the least talented guy in the studio, that's why I'm the boss. It may sound like a joke but it's bloody true."

He's undoubtedly being modest, because Arkedo is obviously thriving under his leadership, to the extent that Sega saw their potential and finally signed them up. "We've been having a lot of fun with complete creative freedom, and absolutely no parental supervision from Sega for a year and a half."

Guermonprez excitedly tells a story about how Arkedo met with the Sonic Team during a visit to Sega. After the legendary team played Hell Yeah! they "cheered us with champagne". It was clearly a defining moment for the industry veteran, and one that provides him great satisfaction in the retelling.

It's easy to see why the Sonic Team were so impressed with what they saw. Hell Yeah! is a visually distinctive game, full of macabre charm and a sense of fun that is missing in so many contemporary titles. "We tried to put a smile on your face and keep it there for a long time."

It starts off with Ash advancing through the early stages of Hell. He is sans equipment and, frankly, he's not up to much. "You want to go all Mario on the first monsters, but you can't even do that," we were told. "You're hurt by a thorn. What the fuck? You're the Prince of Hell and you get hurt by a thorn!"

It's a very deliberate move, designed to emphasise the exhilaration felt when you finally climb inside the wheel; a ferocious spiked ring which our floppy eared protagonist uses to slaughter the minions of Hell with.

Whilst the visual style of the game is completely unique, the influences are there for all to see. Ash uses his wheel to advance through tunnels, up and down, and round and round. But instead of freeing little bunnies or squashing aggressive toadstools, our anti-hero uses his wheel of death to make monster soup out of an incredible array of hellish creatures.

"Each monster has a story, he's not in Hell for nothing." And each has an amusing quick time event that, upon completion, results in a theatrical death (usually involving his innards splatting across the screen). Set pieces that we saw included a hilarious Quiz of Doom. All the events we saw were different, and you wouldn't be surprised if each was as individual as the monsters that appear with them in the game.

Then there are the boss battles. We only saw one, but it looked good. Our expert demonstrator obviously knew all of the sweet spots, and dispatched the first big bad with ease not likely to be replicated by the masses when we finally get our hands on the finished game.

"I would say it's a video game, the way we remember them," said the charismatic Frenchman, summing up. "All these memories, all this stuff, all that has been invented in terms of gameplay over the last 25 years, we really wanted to pay our homage to the kind of stuff that made us want to do what we're doing today."

If it's a love letter to influences past, it's a grotesquely beautiful one. The whole thing looks superb. The palette has been expertly chosen, and the animations are crisp and eye-catching. The aesthetics reflect the playful deviousness that exudes from the rest of the game. The fusion of style and content works; this is a game that talks silly, and walks silly. But are we looking forward to playing it? Hell Yeah!

"The protagonist isn't your usual player character; he's a violent little bunny with a penchant for saw blades and mutilation."

Challenge courses and Pimp My Rabbit.

Arkedo Studio's Camille Guermonprez explains how - amongst other things - cooking and Tim Schafer aided in the creation his team's Metroidvania title.

"The palette has been expertly chosen, and the animations are crisp and eye-catching."

Wrath of the Dead Rabbit. 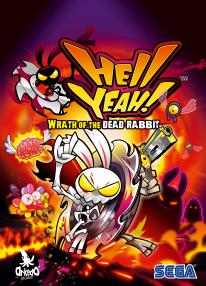