Seldom have been so thoroughly disappointed in a game as we were with Harry Potter and the Deathly Hallows - Part 1. Even if Harry Potter hasn't exactly gone from strength to strength in his video game career it was certainly a low point even for him.

In the sequel you are immediately thrown in to the thick of the action, apparently there was no time to explain things for a newcomer to the fiction. It almost comes across as if someone just pressed the pause button at the end of the last game and we get to take over in the middle of a game. We head out on a mission and the greater scheme of things slowly become apparent.

Just as in the previous game this a shooter, that works according to the same principles as say Gears of War or any other third person shooter. You need to find cover to avoid enemy attacks, pick the right moment to launch a counter offensive, and solve small side missions that don't involve shooting on the side.

It's simple to see how EA Bright Light have translated all the components of a standard shooter to the Harry Potter universe, and it all seems a bit ridiculous. The spells that were magic and special components of the books and movies, have been slotted in to replace the standard arsenal of guns in a third person shooter. Harry, Ron and Hermione shout out "Stupefy", "Expulso", and "Confringo", time and time again, but they might as well yell "pistol", "assault rifle" and "rocket-launcher" as the end result is the same.

Personally I'm still a bit confused as to what lead the developer to believe that this was the proper direction to take when translating the last two films to the video game format. But if it had been better put together and more entertaining, I wouldn't have had much of a problem with the concept.

The fact that there isn't much entertainment to be squeezed out of the game is quickly apparent, and it becomes all the more obvious with every minute you play the game. It is as if the developer systematically goes through the games that have inspired this title and picked some of the worse sequences of these games to recreate. It also seems as if, these focus on various different elements, meant that there wasn't much time to ensure that the most fundamental game mechanics melded well together.

The levels are designed in a way that it quickly feels as if they are all microscopic arenas, and you will soon know just where the enemies will pop up before they have appeared. To use cover is often problematic as Harry has a hard time telling the difference between objects that can be used for cover, and it is also difficult to move from to cover to cover once he is in cover.

Things aren't made better by the fact that missions often amount to boring things such as escort missions, and missions where one has to assume that your wand has been equipped with a scope as you take on sniper duties. The levels come across as frustratingly long, and just as you think you have finished, you are asked to do the exact same thing once more.

In the Playstation 3 version (that this review is based upon) you can also use the Move controller, which allows you to aim accurately with the motion controller. But given that the game almost does the aiming for you when you use the standard controller it feels like a disadvantage. And as there are no other creative uses for the Move controller if feels as though it doesn't add much to the experience.

As the developers themselves have been quick to point out there have been several improvements made to concept since Part 1. An example of these improvements is that it's easier to shift between the various spells. There is also a bit more variation as you will get to play as some of the other well known characters from the books and movies.

A couple of small improvements doesn't help hide the fact that this is a shooter that lacks ideas with the Harry Potter brand tacked on to it. You can play through all of it in less than four and unless you are a die-hard Harry Potter fan or a Trophy/Achievement fanatic who wants some easy points, there isn't much to be had here. A Harry Potter adventure that lacks magic and fails to entertain.

Gamereactor UK
+
Hermione almost looks like Emma Watson, easy to pick up if you are familiar with the genre.
-
Boring missions, lack of new ideas, imprecise controls, lacklustre graphics.
is our network score. What's yours? The network score is the average of every country's score

REVIEW. Written by Thomas Blichfeldt (Gamereactor Denmark) on the 15th of July 2011 at 15

"A couple of small improvements doesn't help hide the fact that this is a shooter that lacks ideas with the Harry Potter brand tacked on."

EA in talks with Bright Light.

Try the Deathly Hallows on your PC.

Better luck this time around?

Screens from the final Harry Potter

At least the games based on the movies. 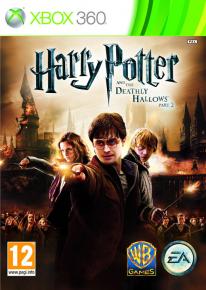