Dirt 2 was a fantastic game, but there is no escaping the fact that wasn't the most varied experience. This is something Codemasters themselves are quick to admit and something they aim to rectify with Dirt 3. About 60 per cent of the game will be made up of rally and trailblazer events, and rally stages will make up the majority of that.

Our journey around the world will take us to places such as Norway, Kenya, Monaco, Finland, and Aspen. Familiar events like Rally, Trailblazer, Landrush and Hill Climb are complemented with a brand new addition, Gymkhana. A phenomenon that got worldwide attention largely thanks to Ken Block's internet videos where he performs various insane stunts with juiced up cars. Codemasters have built a virtual DC Compund next to London's Battersea Station, and the player is given ample space to try their tricks and as you progress in the career mode new areas will be unlocked.

Gymkhana is something that's entirely new, not just for the series but for the whole genre. It focuses on precision driving in what's often very cramped spaces, where you will need to make use of quick reactions with both feet, as well on your handbrake and steering wheel to avoid making a mess of things. With more than twice the horse power of a standard rally car, there is a lot to control, and at first it's really difficult to get a handle on it. Tremendous torque, brakes that will stop you dead in an instant on tarmac, and a shifting distribution of weight that is out of this world make for a very entertaining game mode.

As you make your way around DC Compound you can also record your runs and put them on Youtube with a couple of simple button presses. If you find controlling these powerful beasts a bit too hard Codemasters have added a new means of control called tricksteer, but it will be up to the player whether they want to use this control method or the standard one.

The car physics have also been revamped since Dirt 2, something that comes across well and truly after a special stage through the winter forests of Finland. This time around you will have a bit less artificial grip to rely on and instead you will have to navigate the turns with minimal steering. What felt almost impossible at first quickly became second nature and fully logical as any recklessness was punished in an instant. The surface of the roads have also been worked on, and you will get to experience bumps, holes, and when you drive on snow you will leave tracks that will have an effect on your driving as you make it around a second lap.

Codemasters attempts to take the driving in Dirt 3 to the next level are further highlighted by rally driver Kris Meeke who told us about the changes made to the physics and settings. Kris, who will sit in a Mini during next year's WRC, told us that he could now use the same settings he drives with in Dirt 3. As he sets the suspension, tire pressure and a host of other things he gets pretty much the same result in Dirt 3 as he would get on muddy dirt roads.

It's hard not to get carried away as you listen to Codemasters hype up Dirt 3. Less toying around in gigantic jeeps and buggys, and more traditional rally driving. On top of that more variation is promised and we're told you will never have to compete in the same stage twice in the career mode. Add to this stages where you decide what time of day you'll be driving, better weather effects, more realistic driving physics, a greater challenge and more options and settings and it's easy to get overly excited.

On top of that we're promised a better online experience where you and your friends can customise competitions, compete in exclusive online game modes or have a friend sit next to you and enjoy a bit of split screen action. If Codemasters manages to deliver everything they promise we may very well have the best rally game of all times on our hands.

REVIEW. Written by Thomas Blichfeldt (Gamereactor Denmark) on the 23rd of May 2011 at 16

"It's quite obvious that Codemasters have wanted to make a game that on all accounts beats the rest of the genre, and that's something that they've partially succeeded with..."

To celebrate the release of Dirt 3, game composer Christian Stevenson explains the long-haul process necessary in putting together its soundtrack.

We race our way into the studio

See (and listen) to it all here.

We caught up with Dirt 3 composer Christian Stevenson to talk the dos and don'ts of licensed music in videogames. Here's eight commandments every game should follow.

ARTICLE. Written by Kimmo Pukkila (Gamereactor Finland) on the 2nd of May 2011 at 15

"The sensation of driving a rally car through the technical stages and that gamble of touching a snow bank has really been captured..." 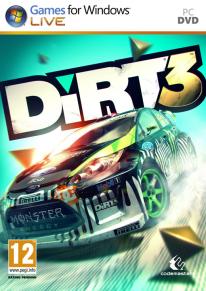