Family can be hard work. You all understand that. Everyone understands that. Living with anyone can be tough going, and when you're stuck in the same building together year after year after arduous year those little idiosyncrasies can really start to grate and even a loved parent or partner can begin to scratch away at your nerves. Now, imagine that your dear old dad is, in fact, the lord of hell itself. Well, not hell, rather the underworld, but that's precisely the case in Hades, the new roguelite dungeon crawler from Supergiant Games (Transistor, Bastion).

Pops, otherwise known as Hades, is the god of the underworld in Greek mythology. Brother to Zeus and ruler of the realm of the undead, he doesn't really mix with his siblings and extended family. Instead, Hades sits on his throne down the bowels of the earth, his three-headed dog Cerberus sitting by his side as recently dead spirits shuffle through the reception towards their final end and judgement.

You, the player, are Zagreus. Along with your father and his entourage you live down in the depths of the underworld until you eventually decide that you'd rather not, and so you resolve to move out. The only trouble with that plan is that leaving this particular home is a rather tricky affair, and very few people have ever managed it because the exit is somewhat blocked with demons and beasties just itching to send you back to meet with your father directly.

Some of the most engaging roguelike and roguelite games are thus because of the care that goes into the framework that surrounds the oftentimes punishing gameplay. The theme and the mechanics go hand in hand with pleasing elegance in Hades, and Supergiant makes great use of your return visits to the hub world between deaths to further the story and bulk out your understanding of the game's mechanical and narrative intricacies. You'll meet with your father and his various servants, make passive upgrades in your bedroom, or chat with your old sparring partner Achilles. Then you're back at it, taking on waves of new enemies and exploring further into the underworld as you look to escape your surroundings.

While there is a sense of progression with upgrades made to your character over time, for the most part, each run is unique and unlike the last. This is achieved by an ever-changing dungeon that rearranges itself ahead of each new run. As you explore you'll meet powerful enemies, tackle deadly boss battles, and make decisions about which rewards you want to pursue. While the world rearranges itself the main hub does not, although there are scripted changes that see characters move around and find new things to say, and this forms the narrative around your repeated attempts to leave home and go visit your family on Olympus.

Speaking of which, during each attempt, you can also earn the favour of certain Olympian gods which creates even more gameplay variance. Different blessings will imbue your attacks with different effects, like when Zeus let us buff our basic so that it chained lightning between enemies. Not super original but certainly pleasing to behold - we missed that ability in the subsequent run. Later on, Aphrodite slowed down our dash move slightly but gave us a bit of bite by damaging those enemies we charged into. Each god offers a range of helpful abilities to choose from and each of the various options will gently push you towards a specific play-style.

We started playing on a mouse and keyboard, but after we tested on a controller we decided to persist with it because we thought that the movement felt a touch more natural via an analog stick. Either way, the controls are generally quite straightforward as you alternate between your main attack and special, with a dash to move you in or out of danger. There's also a neat ranged attack that binds to its target and must be retrieved once they're downed, adding a dash of tactical consideration to proceedings. Over time you'll unlock new weapons (we really liked the bow) and these also change things up in terms of how you approach any given challenge.

We've not mentioned it yet, but one aspect of Hades that really stands out is the audio-visual design. The studio has a reputation in this department and once again it doesn't disappoint. The backgrounds are detailed and beautifully designed, and the characters look great too. There were occasional performance dips that affected the smoothness of certain animations, but by and large, Supergiant has once again delivered a fine-looking game that oozes style. Simply put, it's already looking rather polished and the challenge ahead for the studio is going to be adding in meaningful content and balancing that content against existing gameplay systems.

The biggest hurdle for more action-packed roguelikes to overcome is ensuring that the gameplay itself has enough variety and nuance to accommodate all those repeat plays. Indeed, that's the part of the game that Supergiant is going to be exploring and iterating upon over the months ahead. What's there already feels very slick, though, and we don't think we've gotten anywhere near the end of the game as it stands. With more content still to come, this feels like a fairly low-risk project to back pre-release, and what's there is as polished as it is playable.

Whether it goes on to become a genre great is another matter. The art style and structure built around the game are certainly impressive, and the gameplay itself is fast and frenetic. As more features are layered in, however, we hope to see a greater range of possibilities in terms of tactics and combat, and we think that will be what ultimately defines how good Hades goes on to become. As it stands, Supergiant has made a positive start and Hades is in great shape for an Early Access title, and if you're an action-RPG fan with a taste for Greek mythology, it's well worth keeping an eye on.

Thank you for your time. We will take care of this matter as soon as posible
This wants to be on consoles VERY VERY SOON Indeed this looks incredible im all over this man 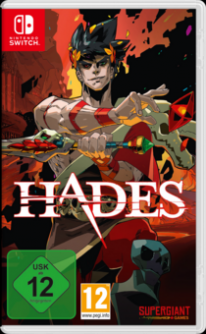