Stadia is now launching in just a few short hours with 22 launch titles. While that might initially sound a lot better than 12 - and it most certainly does - it's still worth pointing out that the vast majority of those titles are old, as in more than six months old. While Google does have the ambition of creating a wide variety of exclusives in the future in order to sell their new service, as of yet, they've had to buy one from developer Tequila Works, a studio that previously created titles such as Rime and Deadlight.

The game's name is Gylt, and it stands as the sole exclusive reason to buy into Stadia right now, apart from its obvious cloud-based advantages (and possible disadvantages). Because of this, the pressure is on Tequila Works now, more so than perhaps is warranted considering the game's size and scope, but it has been given the daunting task of being part of the appeal of Stadia, at the very least its exclusive appeal. So, is it any good?

Well, answering that is complicated, so let's dive in deeper. First off, Gylt wears its inspiration on its sleeve. Like Rime, which borrowed a lot of that sense of isolation from Team Ico, this time around it seems as though the Silent Hill universe has been the primary source of inspiration. We're not criticising the acknowledgement of heroes, but some might find the obvious comparisons here a bit of a stretch.

In Gylt you play as Sally, a girl who lives in the sorrowful and isolated mountain city of Bethelwood. The majority of its citizens work in a factory in the mountains, and this sleepy community is one day rocked by the disappearance of Emily Kauffman, Sally's cousin. Sally sets out to find her but ends up in a nightmarish version of her home town filled with monsters. It is here that Emily has seemingly been trapped, and so you must rescue your cousin, avoid the horrors looking for you, and also come to terms with the consequences of your actions.

There's a pretty direct metaphor at play here. You wander around the school avoiding monsters, much like the cousins avoided bullies, and as you play Sally learns to cope with her fears and ever so slowly begins to fight back. Still, while the main plot only dips its toes in its main themes and leaves a lot of exposition to be desired, it does string the player along in a satisfying fashion, relegating much of its context to environmental storytelling. Many of the classrooms and libraries of the school have curious writing on the walls and chalkboards to give you a deeper understanding of the social difficulties plaguing this community, and that has had a tangible effect on both of the girls, albeit in different ways.

Almost the entirety of the game, however, is played alone, searching for Emily, and so Sally has nobody to expose the narrative to in a naturalistic way. Expect her to talk a lot to herself. Still, Sally and Emily come off as genuine children, Sally being a pre-teen and Emily being an actual child, and they feel three-dimensional and multi-faceted, and while simple, the story does end up feeling like the most satisfactory aspect of the overall experience, despite the lack of an innovative premise.

Where Gylt falters, however, is in how it's played. You mainly explore the school grounds - or at least a nightmarish reflection of it filled with cartoonish interpretations of Lovecraftian monsters. While initially appearing more open, with a world map and several opportunities to explore in order to learn more about the community and gain extra resources, Gylt is pretty straight-forward. Not that there's anything wrong with that, but the sense of linearity combined with its shallow mechanical set-up doesn't make for particularly entertaining play.

This is mainly a stealth game, meaning that for the most part, you are better off avoiding confrontations with monsters. You crouch using B and pretty much stay like this for the entirety of the game. During your journey, you scavenge for inhalers that restore lost health, search for batteries to power your flashlight, and find books and images that expand the narrative. More tools are added later, but as a stealth game, Gylt sticks to a familiar and simple blueprint and veers very little from its limited set-up during its six-seven hour run time.

It's not broken in any sense of the word, and there are ways to spice things up by luring monsters with the cone of light from your flashlight and thereby allowing you to sneak past. There are also detection indicators to create more tension, as well as several enemy types (most of which we shan't spoil) that require different tactical approaches. Most of the time though, it's pretty clear where you need to go, which enemies you must fight, and those you must not. In most rooms there is debris, toppled over tables and stacked boxes that carve out a clear route for you, and Gylt is never comfortable with giving players the tools to simply create their own path or allow proper freedom or real exploration. It's all pre-arranged, and that's quite alright, but it's not particularly scary as a result, nor is it particularly inventive.

Combat is introduced a third of the way through using a concentrated flashlight beam to "pop" blisters on the monsters. They'll attempt to charge, but popping each set will push it back, and ultimately destroy it. Combat, as is the case in many games designed primarily to spook you, undermines the little tension that there is, and it also removes, in many cases, a vital sense of vulnerability.

And that leads to our primary gripe with Gylt, which is an overall tonal inconsistency that plagues it from start to finish. While the setup is Silent Hill, the cartoonish visuals are Guillermo del Toro, and the childlike drama at its centre is a bit Stranger Things or It, and it never fully commits to any of it. It's clearly not for children, yet it feels like Sally sometimes talks to you as a peer. The monster design is imaginative but never scary, as there's no gore, and no proper shock value to really hammer home the point that Sally is in actual danger. In fact, she seems mostly perplexed by the entire situation rather than scared. To summarise, it's unclear whether we should be scared by the world of Gylt, or whether the intrigue should come from its metaphorical handling of the drama between its two main characters. If that's the case, maybe more drama and interaction would have benefited the story.

As confusing as it may be, Gylt does both look and sound satisfactory. Tequila Works is skilled at creating breathtaking visuals, and while it does not have the immediate grandeur of Rime, the cartoon-like and seemingly Laika-inspired visual identity does make for some interesting imagery. In particular, some of the classrooms are painstakingly filled with narrative tidbits, and it's difficult not to get drawn in and look for extra environmental exposition as you move through. The voice acting is also fine, and Sally has been brought to life with a sufficient amount of depth. However, there's so little actual talking, that much of the time you're relegated to silence.

Gylt is not a bad game. It looks good, it's simple but satisfactory to play, and while its inspiration is crystal clear, Tequila Works has, once again, shown promise as a developer. But, as we've seen before, the magic is often found in between these spaces, and with Gylt there's simply no glue holding the experience together. Tonal inconsistencies, bad design choices and a world that's neither linear nor open left us confused; based on that, it's hard to say that Gylt bears the weight of being the sole exclusive in the Stadia's launch line-up.

HQ
Gamereactor UK
+
Interesting story, some lovely world design.
-
Tonally inconsistent, not enough depth in terms of mechanics.
is our network score. What's yours? The network score is the average of every country's score 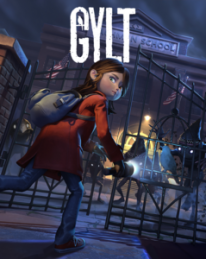