This is perfectly normal; the more music games are released, the higher our demands become. Do you guys remember the first two Guitar Hero games? Plastic guitars were new and cool and nobody even had a thought to start whining about a lack of original songs or support for a complete band. Today The Beatles have their own game, all gameplay has been sharpened, the bar has been set much higher and you can't just throw anything together and hope that it sells. If Guitar Hero: Van Halen had been released five years ago we would have celebrated, today it's pretty much a big yawn.

I am personally a big Van Halen fan and before I say anything else about their Guitar Hero-game I have to mention my experiences with songs like Eruption, Panama and Ice Cream Man. Mentioned and praised, that is. The bombastic guitars in Eruption even gives Guitar Hero-classics like Cliffs of Dover a run for their money, Panama (Pana-ma-ah!) is a pleasure to howl through at parties and Ice Cream Man makes me melt a bit inside. Splending! That's great! So, why can't this be love? There's a couple of reasons.

As usual, we're not only getting songs from Van Halen despite the fact that this game is named after them. For every four songs of Van Halen, you get five songs from other bands that you unlock by gathering stars (just like in Guitar Hero: Metallica). Now, I am not intimately familiar with what the Van Halen-brothers keep on their iPods, but I can't really relate bands like Third Eye Blind or Blink 182 to the way they sounded (and, of course, iPods weren't even invented when the band was at its peak). You will find bands like Queen and Billy Idol on the disc, but there's just too much year 2000 and beyond.

Fans of Van Halen will probably shake their heads in confusion a couple of times. One reason is that David Lee Roth is the constant singer in Guitar Hero: Van Halen and there's not a single Sammy Hagar-song to found. Former bass-player Michael Anthony has been replaced Eddie's son Wolfgang, even during classic Van Halen-songs. No arena rock, no spandex, no 80's and it's sad that the final product suffers because of it.

You also get the clear feeling that the band members themselves haven't even been near the development of the game in the same way that Metallica was. The Extras-menu is almost a joke. Instead of some nice music history we get song lyrics, credits (hooray) and a really weird Soundboard-mode where you get to push buttons to hear guitar-pieces from the songs. Compared to Guitar Hero: Metallica and The Beatles: Rock Band this feels much more like an expansion and not a proper salute to the band being portrayed.

Another thing that's a step backwords for the genre is that the new game mechanics we found in Guitar Hero 5 is nowhere to be seen in Guitar Hero: Van Halen. Instrument-specific challenges during the songs? Nope. Jump in and out whenever you want during a song? Not a chance. Support for downloadable content? Not that either.

I really like Van Halen and I guess that makes Guitar Hero: Van Halen feel even more like a big let down. It's not a bad game as such, and as usual with these kind of band-related games it's almost guaranteed that you'll have fun playing with three friends. The Guitar Hero-freaks should be happy hunting down FCs (full combos) on Eruption or Spanish Fly. But the band deserves better than this, and perhaps they could have made an effort themselves to be a part of the process. Sad, despite Ice Cream Man and a tested and tried concept.

Van Halen-songs:
"Ain't Talkin Bout Love"
"And The Cradle Will Rock"
"Atomic Punk"
"Beautiful Girls"
"Cathedral" (solo)
"Dance The Night Away"
"Eruption" (solo)
"Everybody Wants Some"
"Feel Your Love Tonight"
"Hang ‘Em High"
"Hear About It Later"
"Hot For Teacher"
"Ice Cream Man"
"I'm The One"
"Jamie's Cryin"
"Jump"
"Little Guitars"
"Loss Of Control"
"Mean Street"
"Panama"
"Pretty Woman"
"Romeo Delight"
"Running With The Devil"
"So This Is Love"
"Somebody Get Me A Doctor"
"Spanish Fly" (solo)
"Unchained"
"You Really Got Me"

Gamereactor UK
+
Some really good songs, wild guitars
-
Just a small piece of the band's career, odd guest artists, no Guitar Hero 5-functions, hardly any extra material
is our network score. What's yours? The network score is the average of every country's score

Europe gets it next year 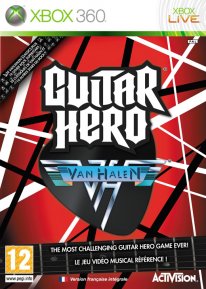