Miiiilk. Spelled with four I's. A central battlecry for one of the sides in the debate wars about the development of the Guitar Hero franchise. When new Guitar Hero titles have appeared I have always been the one who has refrained from using the word in question. I have defended the series and can honestly say I've had fun with titles like Guitar Hero: Aerosmith. The reason is that every part actually has offered something new. Little innovations in gameplay or music selection. Not always brilliant, but at least fresh.

For number one was number one, Guitar Hero II offered base and the third game had a new developer and boss fights. World Tour brought a whole band together. But Guitar Hero 5... This is definitely the most anonymous game in the series. Just more of everything. Not even a subtitle or exciting box art. Is it time for even me to use the M-word?

Guitar Hero 5 contains 85 songs by 83 different artists and the music style is very varied. You get to play everything from Coldplay to Johnny Cash, and even Rammstein for the guy who wants to feel angry and German (and who doesn't?). Variation is of course hard to criticise, but I can understand people who regard the track list as random. There's kind of an emphasis on modern music; about a quarter of the songs have been released in the last 18 months.

Apart from the songs in the box it's now possible (for the first time in the series history) to import songs from previous titles, which of course is a good thing. Not all the songs are available though; from World Tour it's at the moment only possible (for a small fee) to import 35 songs, and from Smash Hits only 21. DLC songs are also available for re-download.

Guitar Hero 5 offers a few relatively interesting changes in gameplay. The best one is that your band now can consist of any instrument combination. 4 guitars or even 4 drummers is possible, and any combination in between. All the band members now have their own rock meter and should it hit the red your band mates can revive you, either by star power or just by playing well for a while. "Band Moments" consist of sections of fiery notes that everyone has to hit for more points, visual effects and a cozy feeling of plastic camaraderie.

Two new partylike game modes are also on the menu, and these make it clear how Guitar Hero 5 really are flirting with the casual players. The first one is called Party Play and lets players jump in and out of bands anytime they please, even in the middle of a song. Instruments and difficulty can also be changed at any time. RockFest is played by four people in the couch or eight band members online. Here are also several subcategories where we play with different rules. In Momentum, for instance, the difficulty is changed dynamically depending on how well you play, Perfectionist counts how many percent notes that have been hit, and Streakers is not about playing in the nude, instead the goal is to hit as long combos as possible.

Before every song we also get informed about specific challenges. These consist of whammying the long notes as much as possible, nailing a certain amount of hammer-ons or pull-offs, or just maintaining a 4x multiplier for a certain amount of time. Experienced and beautiful players like me who don't raise an eyebrow at a five-star round will find these extra challenges a welcome touch that will maintain interest during the whole song. Completed challenges rewards you with extra stars, which help you progress through the career mode quicker.

There's not a whole lot of of banana-difficult songs here though. There are exceptions though; Jeff Becks "Scatterbrain", The Derek Trucks Bands "Younk Funk" (instrumental Guitar Hero-songs really kick ass) and Children of Bodoms "Done With Everything, Die for Nothing" are pretty demanding tracks for the guitarists, as well as Santanas "No One to Depend On", which the drummers might find pretty interesting too.

Talking presentation, Guitar Hero 5 is really yummy. In spite of some curious font choices, the menus are a joy to flick through and everything is as we said more accessible than for instance World Tours phony tour/gig-setup. The guitar neck is nice, the star power effects are nice and the venues are designed with a lot of imagination. These arc between places like an Irish green festival venue to a hay-smelling country club. The characters have never looked more life-like in their rockish movements and the lip sync is spot-on. The camera angles and "swooshing" pans over the band members after a finished songs also give a great sense of accomplishment.

Including Johnny Cash and Kurt Cobain as playable characters is something that Activision have promoted heavily as the ace up Guitar Hero 5:s sleeve, in trailers and press releases. Somehow something doesn't feel right about this . Both of the stars were people I don't think would have approved something like this, but there you are. Go have fun with them.

So will I, your humble reviewer, utter the dreaded M-word? It is a difficult, almost personal and intimate question. After several entertaining sessions of Guitar Hero 5 I can say that milking isn't necessarily a bad thing, as long as the milk tastes good. Guitar Hero 5 is a satisfying, somewhat familiar milk, but perhaps some rest for the cow would do some good...

Gamereactor UK
+
Accessible, some really good songs, nice animation and graphics, excellent party game
-
Not a perfect track list, kind of easy, anonymous game
is our network score. What's yours? The network score is the average of every country's score

Has the milk turned sour with the latest entry in the series?

Brian Bright gives us the low down

Rock out with Activision's rock fest

Man in Black lives on 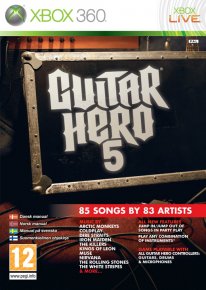