It seems like we won't have to worry that Horizon Forbidden West will get a sloppy version for PlayStation 4. According to game director Mathijs de Jonge, Guerrilla Games have in fact done a lot of the development of the game on PlayStation 4.

This was revealed in an interview with Game Informer, in which de Jonge explains:

"A lot of the development has taken place on the PlayStation 4 and a lot of playtesting is also done on PlayStation 4 so we are ensuring that owners of that console will have a great experience and that the game will look fantastic on that console."

On the PlayStation 5, we can of course look forward to better graphics and de Jonge had some nuggets to share about that as well:

"Visually we can add a lot more detail. Graphically, the rendering technique for the underwater scenes is special on the PlayStation 5 — it has extra detail and extra systems. Like the wave technique is better on that system as well."

He also touched up the release date. As we reported earlier this week, Sony said that they think Horizon Forbidden West will be released this year, but added that they cannot promise it. de Jonge is thinking the same way:

"We just need a little bit more time, and then we can come back with a final release date." 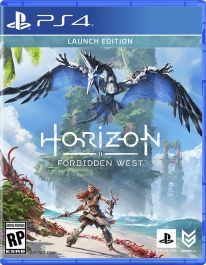