From the original Warcraft III mod to stand-alone games such as Heroes of Newerth and the hugely successful League of Legends, to Valve's Dota 2 and the massive resources they are putting into it. MOBA's are big. Really, really big.

Any immensely popular genre (and we're talking 20+ million players, here) obviously means that other companies will try and get their piece of the pie, and so we've seen a swath of MOBAs and MOBA-inspired games over the past few years. Some successful, others quickly fading.

It's difficult to stand out in a crowded space, but Guardians of Middle-Earth has three things going for it that will surely help. For one, it's based on Lord of the Rings - meaning you get to play as Gandalf, among others. Secondly, it's on consoles, where the genre has yet to gain a foothold. And third, and perhaps most important of all, it's taken a sander to some of the more pronounced rough edges of the genre.

While Dota, League of Legends and the others are immensely popular, they also have a reputation for being merciless on newcomers and having a brutal difficulty curve. Monolith have had some tough choices as they bring the concept over from PC to console, but judging from our time with an early version, they've managed to make the game a lot more accessible.

If you don't know what a MOBA is, here's a short primer: Two teams of five heroes battle to destroy a central building in their opponent's base. A constant trickle of AI-controlled grunts stream towards the enemy base across three lanes. Every lane has a hard-hitting defensive tower that needs to be taken out in order to stand a chance of reaching the opposing base. All the heroes start at level 1, but gain ranks as the game progresses, giving them access to new abilities and spells.

The original DOTA included over 100 heroes, and at least as many items to be bought from the store back at the base, or from the secret stores hidden in the map. Complex is something of an understatement.

Guardians of Middle-Earth breaks some of these conventions, but without compromising the essence of the concept. Die-hard fans may want to scream about sacrilege and blasphemy at some of the changes I'm about to mention, but if you're not already heavily invested in a MOBA, they make perfect sense, even if they sacrifice a little depth in order to make things more accessible.

For instance, there are no items in Guardians of Middle-Earth, and consequently no shops and no gold (which usually doubles as both currency and XP). You start out with your standard attack, and all other abilities must be earned by killing enemies.

Furthermore, there's no last-hitting. In most MOBAs, you only get gold or XP for the enemies you kill yourself, i.e. the ones you score the last hit on. There's none of that here. Instead, you get XP for every enemy that dies near you, with an extra bonus added if you get the killing blow.

Those are two rather significant changes, but they'll be welcomed by new players as they do away with some of the most counter-intuitive and overwhelmingly complex mechanics of the competitors. In other words, Guardians of Middle-Earth is a lot more accessible.

This is perfectly exemplified in the two 20 minute games I get to play during a presentation at Gamescom. The first round is mostly just for fun, giving us time to learn the ropes and get a handle on mechanics, controls and so on. The second round is deadly serious, however.

Now, the Dota 2 beta has been sitting on my harddrive for months, but I haven't really been able to muster the motivation to play it for very long - mostly because I've been having a hard time cracking it. Figuring out what the hell is going on.

My first foray into Guardians of Middle-Earth is different. Almost immediately, I feel like I'm on top of what's going on. I know when to push towards the enemy tower in my lane, when to pull back to my own. I know when someone needs assistance in their lane, and when I should chase an opponent through the jungle. Everything just clicks, almost from the get-go. The fact that Monolith has removed some of the rougher edges makes it dead-easy to quickly get to the core of the game.

I'm normally a MOBA sceptic, but here I'm having fun from the very first moment. I'm playing Gandalf, one of the about 25 heroes on offer. His spells includes a shield (Flame of Udûm) and an Ultimate (an ability you can't unlock until you reach some of the higher levels) that does heavy damage, silences and is just badass in general. Other heroes include characters like Galadriel, Gollum and Sauron.

The MOBA genre has its roots in Real Time Strategy, and the controls usually reflect that, which means you have to click your mouse wherever you want your hero to go. Monolith have completely rethought the controls for the consoles, and their solution is both elegant and a joy to use. The left stick controls your character, while the right stick controls your aim. Your standard attack is on the right trigger, while the face buttons are used for abilities and spells. Once you level up, it's just a matter of holding down the right bumper and selecting what spell to upgrade with the face buttons. Teleporting back to your base is done with the Back button.

It works perfectly in practice. So well, in fact, that when I recently fired up Dota 2, encouraged by my experience with Guardians of Middle-Earth, I quickly grew frustrated with how clumsy and imprecise the traditional keyboard/mouse controls felt in comparison.

There are three game modes on offer. The first is called Battlegrounds, and is distinguished by a 20 minute time limit per game. If no-one manages to destroy the opposing base before time runs out, the team with the most points wins. Bots fill out any empty player slots.

The second is called Elite, and is closer to traditional MOBA rules. That means no time limit and no bots. All ten heroes must be controlled by players, and a game will typically lasts around an hour.

Finally, there's skirmish, where up to five players team up to fight a team of bots, with empty slots on the player team being filled by bots as needed.

On paper, it's an immensely difficult task to port such a PC-centric genre as MOBA to the consoles, but judging from the hour we've spent with the game, Monolith has managed to do so with flying colours. Not only have they made the formula work with the controller, they've also made the game more accessible. Guardians of Middle-Earth looks nothing like a quick attempt to cash in on a trend by sticking a well-known license on top, but a well crafted and well thought out take on the genre.

REVIEW. Written by Rasmus Lund-Hansen on the 7th of December 2012 at 17

Nori in Guardians of Middle-Earth

Character from The Hobbit joins the action. 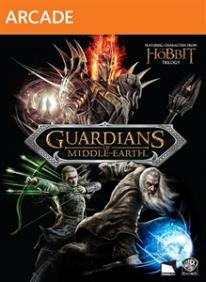