The original Guacamelee is a game we rather enjoyed, and if you have yet to play Drinkbox Studios' colourful and eccentric action-platformer, then you might want to head over to Steam and download it right now, since it's currently free.

You'll have to be very quick though, as the Super Turbo Championship Edition is 100% discounted until today at 18:00 (BST), so there are mere hours to get involved with the luchador game for no cost.

Have you played the original?

"Drinkbox Studios' serves up a bowl of Mexican themed Metroidvania with their latest PS3 and PS Vita effort."

Guacamelee is currently free on Steam

The Super Turbo Championship Edition only has the 100% discount for another few hours though, so you'd best be quick.

Guacamelee heading to Xbox One next month, Battleblock Theater to appear on 360.

Guacamelee heading to PS4, Wii U, Xbox 360 and Xbox One

Spelunky and Guacamelee land on Steam

Classy platformers out now on PC.

We caught up with Drinkbox Studios at PAX East. 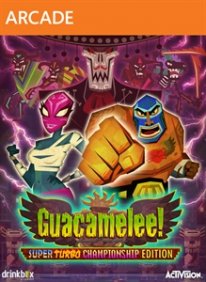