We caught up with Young Horses CEO Philip Tibitoski to discuss the hilarious yet strangely serious nature of Octodad: Dadliest Catch.

What started out as a student project (click this link for an interview on the original Octodad):

"Octodad is game about an octopus who's pretending to be a human father of this family, which doesn't know he's an octopus. And the whole idea is you want to keep this from them because you love them so much and you don't want them to find out and disown you."

"The structure is a bit like an adventure game in that there are 11 chapters and you sort of play through this whole story and there are cutscenes and that sort of thing. And then it gets a bit dramatic. Believe it or not. There's a bit deeper story than people realise."

Octodad: Dadliest Catch was part of Sony's PS4 indie line up and we asked Philip about how that came to be:

"We were contact by [Sony] back in 2011 when we are at GDC, and ever since then they've kind of checked in every now and then on our progress. And then more recently at PAX East they were like "hey, we're doing PS4 are you guys interested in that sort of thing?" and of course, we were like "umm, yes absolutely". And so they sent us kits and we started to try and port it and that only took about a month."

It's easy to see why this game so quickly earned its pledge amount on Kickstarter.

Young Horses took to Twitter to announce the release date.

Octodad getting free DLC for Steam and PS4

Octodad Shorts coming in the next few weeks.

Octodad to land on PS4 next week

We play through some of the Dadliest Catch. 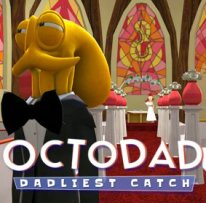