Contrast was one of the indie attractions Sony showed off at their E3 press conference and we caught up with producer Derek Elliott to find out more about the stylish shadow adventure. Unlike most games this isn't a heroic tale of saving the world as it sports a more down to earth family theme.

"Myself and my partner Guillaume from the company, we both have families, we both have two kids, and you know we're a little older than the game developers out there right, we've been around the block a few times. We weren't really interested in making games about killing or saving the world, that type of thing, we really wanted to bring something closer to home that was more about the family unit and some of the struggle and strife that you may have within the family, and how that might affect the kids and how you might resolve those issues."

As far as the art style Elliott explained some of their inspirations and references:

"We're bringing back the vaudeville theme from early 1900's merging that with a bit of film noir to create that darkness that we have in the game. We've pulled a lot of inspiration from movies like Dark City and obviously from Tim Burton, you know, having some of the squiggly and thin aspects to the scene and things are a little bit distorted, that was important to us as well."

Contrast will arrive on PS4 at launch with other versions (PC, PS3 and Xbox 360) released on the same day.

REVIEW. Written by Gillen McAllister on the 26th of November 2013 at 12

"If you're willing to accede to the twitchy controls and prefer a mystery to a clear answer, then Contrast is worth experiencing."

Contrast out now on Xbox One

Puzzler jumps onto a new platform.

Price reduced on PS3 and PS4 to celebrate.

PS4 launch title gets new pics, plus see it action at Gamex.

GRTV: Contrast is a game about family 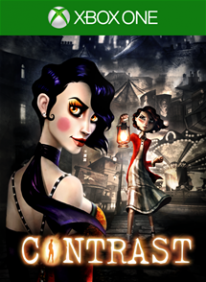