Update: Grin have updated their website with one last farewell from brothers Bo and Ulf Andersson as follows:

"It is with a heavy heart we announce today that GRIN has been forced to close its doors. This as too many publishers have been delaying their payments, causing an unbearable cashflow situation.

After twelve years of hard work, employing hundreds of wonderfully talented men and women, it is over. It has been a great adventure and the GRIN family has experienced what few have.

Looking back at twelve years of games, titles such as Ballistics, Bandits, GRAW 1 & 2, Bionic Commando Rearmed, Wanted: Weapons of Fate, Terminator: Salvation, Bionic Commando and our unreleased masterpiece that we weren't allowed to finish; it has been a great ride."

Swedish developer Grin has filed for bankruptcy today. The developer shipped three games this spring beginning with Wanted: Weapons of Fate in March, followed by Bionic Commando (pictured) and Terminator: Salvation in May. Bionic Commando was met with largely positive, but somewhat mixed reviews, while the two movie licenses received harsh criticism by most reviewers. All games failed to sell up to expectations.

What happened after this was the contracts Grin had for further games got cancelled. A direct effect of the poor performance of their titles paired with the harsh financial climate (not a time when publishers want to roll the dice). Rumours have it that Grin may have been commissioned by Capcom to do a remake of Strider and that this was one of the contracts that got cancelled. Another big Japanese publisher also had a contract with Grin that apparently also fell through. When Gamereactor visited the studio back in March we were told they were working on three new projects, but things change fast in this industry.

Grin closed down their studios in Barcelona (Wanted: Weapons of Fate) and Gothenburg (co-developed Terminator: Salvation with the Stockholm studio) and their QA offices in Jakarta this June while letting a portion of the Stockholm staff go at the same time. At that time we have learned that Grin still had a contract to develop a title, meant to be their big comeback. However, it would seem the cancellation of that project was more than Grin could take as they have now filed for bankruptcy.

Grin quickly grew from being a one game - one studio outfit to a three games - three studios outfit in a few short years, and perhaps that is one of the key reasons for their ultimate demise. But large scale independent game development is a high risk business, even more so these days when publishers are less inclined to take chances. Once the contracts got cancelled costs for Grin must have piled up at an alarming rate and with no royalties from their previous expected it left them with little choice. Another Swedish developer Avalanche Studios was in a similar position, when they had two projects cancelled, but they still had money coming in from Eidos for Just Cause 2 and from Emote Games for The Hunter, so with cut backs they could pull through.

We are hopeful that once things have settled down and cleared up we will be able to bring you some comments from the founders. Grin's name has been added to a growing list of well respected developers to meet their demise for one reason or another in recent times including Factor 5, Deadline Games, Ensemble Studios, Midway Newcastle (formerly Pitbull Syndicate) to name a few.

Bankruptcy on the cards for developer

Get the dirt on the bionic arm

Bionic Commando releases in May

Check out the Polycraft! 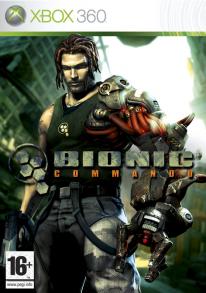