Grid: Autosport is a difficult game to judge. On the one hand this is a game with content we have seen before. Yet it's still a damn good racing game. More so, it feels like a montage of all the different strands of racing Codemasters has delivered in recent years (with the exception of the rally games Colin McRae and Dirt). Codemasters has never stuffed so many courses and so many cars into one package.

The basic premise is that you must master five different disciplines and become the ultimate Grid master: Touring, Open Wheel, Endurance, Street and Tuner.

Touring racing has roots stretching back to the TOCA Touring Car series from the 90s, and offers compact and often aggressive track racing with normal cars. While we perhaps prefer vehicles that have more power under the bonnet, we also appreciate the opportunity to push and shove our way to the front of the pack. Sometimes it's fun to race dirty.

Open Wheel races puts you in the cockpit of Formula 1-like speed demons, and requires high precision and minimal collisions. Unlike other disciplines, there is little to gain by ramming into the other cars here, and it's easy to spin out if you get too heavy with the gas pedal. This is the mode for those who prefer careful technical execution.

Endurance is all about tackling longer races (usually around 8 minutes) where your tires are gradually worn down along the way. Here you drive very powerful supercars that nearly as much kick as the cars that feature in the Open Wheel discipline. You must pay attention to the tires, choosing when to drive aggressively and also when it's best to calm things down (the former naturally wears on the tires more quickly), a balancing act that contributes to a more strategic racing experience.

Street races are easy to explain if you've played the Grid series already. Here we're talking about driving in confined urban environments with a diverse fleet of vehicles. If you have got guts, you can make up lost progress by crashing into other cars, but it is also very easy to end up kissing the barrier, which gets boring if you run out of rewinds (a familiar feature that allows you to set the clock back anywhere up to 30 seconds prior).

Finally we've got the Tuner discipline, which offers a mix of classic races (often with muscle cars), time trials (fight for the best lap time) and drift duels (where the purpose is to drift as much as possible around a short track).

As you probably understand by now we're talking about a comprehensive and diverse package. Still, you get nothing genuinely new in Grid: Autosport, and there's no getting around that fact. All of the tracks and cars that we're given along the way have been seen before. All the different modes have already been explored. The only thing that's new here is that everything is presented in one game. It's a nice idea, but it's lacking something.

Although everything in Grid: Autosport works well, it's also clear that the developers have not put their heart and soul into the project. The menu system is effective, but it's also fairly basic and a little boring. The graphics are decent enough (at least on PC), but it does nothing to rise above Grid 2 or any of the other games that landed at the end of the previous console generation. The same can be said about the audio. It does the job, but nothing more.

At the same time, everything that has been fine previously, it's still fine now. The cars have fairly good contact with the surface, and the weight of the turns and the drifting feels authentic. As before, the series is somewhere between simulator and arcade, and thanks to the ability to turn settinsg on and off (like traction control, anti-spin and so on) you have the ability to fine-tune the experience in either direction.

At the risk of offering a repetitious review: everything in Autosport is solid, but this is mainly because it's largely the same as before. Codemasters has made little in the way of changes, and some annoyances still endure. You still have a teammate who is just as useless as before. The difficulty is also a bit tricky, primarily because of the way events are organised. Medium was too easy, but hard made it too difficult to catch up with the rest of the cars. As long as we had the opportunity to have a go at qualifying we felt like we had a chance, but some of the races forced us to start at the back. This was very annoying, as it varies this by some seemingly arbitrary criteria.

We also had a problem with the career setup: the game presents the impression that you can choose which of the five disciplines you wish to focus on, but in reality you have to level up within each area before qualifying for the Grid Grand Slam tournaments. Most people would probably race a little of everything across the disciplines anyway, but it's still a bit contradictory.

We understand that Codemasters wanted to end the outgoing console generation with something akin to a summary. They always make decent racers, and in this light they deserve to give themselves a pat on the back. But we deserve more than a rehash of their previous games, no matter how good those titles were. And, while we're on the subject, why in heaven's name is there no rally offering in the package?

Overall Grid: Autosport is a bit of a paradox. The game acts as a tribute to the games in the series that have come before, and therefore it's suited to people who haven't played them already. And there's the irony: it's suitable for an audience that likes good racing games, but who have for some reason never checked out the previous Grid or Formula 1 games.

We wouldn't go as far as saying that the release of Grid: Autosport is a slap in the face of the series, after all, no one is forcing you to buy the game, but Autosport could have been so much more, a complete title that offered something fresh to core fans while summarising the best of the past. Grid: Autosport is unfortunately nothing more than a stopgap.

It's a good game, but it still has all the hallmarks of being a side project that Codemasters has released while they're actually focused on something else. Perhaps, with the omission of rally driving, it would fair to speculate that Codemasters are preparing to race onto new-gen consoles with something Dirt-flavoured?

HQ
Gamereactor UK
+
A solid package, good physics, many cars and tracks...
-
Nothing new...
is our network score. What's yours? The network score is the average of every country's score

"This could have been so much more, offering something fresh to core fans while summarising the best of the past. As it is, this feels nothing more than a stopgap."

Grid: Autosport revs up with a Switch version this month

This is close to Codemaster's own Grid game, except this is a re-release of the 2014 version on Nintendo's console.

Another pit stop is inbound after several other launches.

Featuring all of three cars.

Grid: Autosport getting an HD texture pack on PC 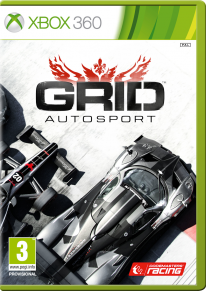