Gravity Rush is one of the most beloved PlayStation Vita titles, and therefore it was a little surprising when Sony unveiled the sequel as a PlayStation 4 exclusive title at Tokyo Game Show in September (despite the little handheld's difficulties in the marketplace). The game returned during Sony's Paris Games Week press conference, where we were introduced to an AI controlled companion called Raven, one of the new cities, and the new combat styles, Jupiter and Lunar. We were also invited to a closed demonstration of the game.

The keyword that the Gravity Rush creator Keiichiro Toyama pointed out over the course of the demonstration was "immersion". The developer thinks that a solid foundation was created with the original, and the purpose of this sequel, the next chapter in the Gravity Rush series, is to build upon that, by expanding the universe and make protagonist Kat and her surroundings feel more alive. The most obvious example of this is the new city, which, by the way, Toyama confirmed is just one of several new locales in the main game. The city is bustling with life and colour. The demonstration starts in a small town square, where a little food market is taking place. Townspeople are looking for groceries, haggling with the shopkeepers, and seemingly interact with each other naturally. It looks absolutely wonderful, and easily erases all memories of the void and the empty areas in the Vita original.

Kat is even equipped with a range of abilities that are designed to make her feel more a part of the world she's protecting. Therefore she can chat with the city's inhabitants, greet them and throw gang signs, and people seem to react to her dynamically. In addition she can also take selfies (when this particular mechanic was unveiled during the demonstration, a long, tired sigh blew through the room).

The city and its idyllic little society doesn't remain calm for long; the iconic Neevi returns and creates chaos around the little market. Kat throws herself up the air, hovers for a few seconds and returns hurling towards the ground. The little town square trembles beneath the weight of the impact, and all the stands at the market are quickly reduced to rubble. You see, all these fancy new environments are destructible, and when Kat does her acrobatic attacks, the air is quickly littered with debris and rubble. It's a fantastic visual spectacle to behold, which not only impresses from an artistic perspective, but also from a technical one; Gravity Rush 2 really knows how to make the most of the horsepower of the PlayStation 4. Take our word for it - Gravity Rush 2 is really beautiful.

The fight against the Neevi invaders gave Toyama an excuse to show off the two new combat styles in the game. Kat can of course still perform the good old gravity defying acrobatics as before, but now she can also, via an easy flick on the Dualshock 4 touch pad, change to two different styles. The Lunar style makes Kat very light, and the Jupiter Style makes her really heavy, so that her attacks have more impact. Whether these styles really add something interesting to the combat, and whether they'll be an alternative to the already stunning gravity powers, we simply don't know.

The demonstration ended with two major reveals. Firstly the Neevi aren't the only enemies we'll get to fight, as the little platform we're standing on is quickly filled with hostile, human soldiers (and they brought giant combat mechs with them). These enemies of course deal damage from a distance, and Kat must therefore be more aggressive when taking on these opponents. It provided the combat scenarios with more variation, and should keep players from getting tired of the Neevi invaders.

But Kat ends up needing help anyway, and this is where Raven arrives, another moment showcased during the press conference. This AI controlled ally (it was confirmed once more during the session that Raven cannot be controlled by another player) will be able to cooperate with Kat during combat, and will be able to do so through a series of combination-based attacks. It demands a certain amount of timing from the player, but do it successfully and you'll have some very deadly combos at your disposal. Toyama briefly mentioned some multiplayer content during the presentation, even though the experience is mainly billed as being single-player.

Rounding off the presentation, Toyama provided some insight into some of the changes the developer has made in regards to size and length. Gravity Rush 2 is going to be between 20-40 hours long, this thanks to the game having three times the amount of missions of the original, and because the game map is 2.5 times larger than the one from the original.

We left the demonstration feeling hopeful, because it seems like Toyama is taking all of the unique mechanics and actions that made the original so special, and has simply added more to the formula. We can't wait to see more.

REVIEW. Written by Stefan Briesenick on the 10th of January 2017 at 08

"The creatively implemented ideas fascinated us and we enjoyed them for the entirety of this lengthy game."

You have some extra time to play the game online.

Gravity Rush 2's servers are closing down in January

Say bye bye to sharing pictures, challenges and treasure hunts with other players.

The free DLC is coming on May 5.

Time to find out what happened to the Lost Children.

Toyama is looking to do something else next.

It's a pretty crazy trailer too. 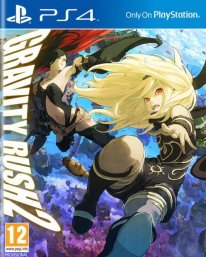