Milestone has been leaning further and further into two-wheel racing of late, but the studio has always had a hand on the wheel of rally simulation too. It was with this preconception in mind that we first looked at Gravel, the studio's upcoming off-road racer. This time, however, Milestone is taking things in an altogether more cinematic, arcade-fuelled direction.

There are a selection of different events to compete in - which we'll get to in a moment - but the unique hook here is that they're all wrapped up in a campaign that has players taking part in a reality TV show of sorts. You're tasked with racing across a range of disciplines, taking on some of the biggest names in the business (not real names, we should add). It's a slick setup and a nice way to move players between different types of events, and it looks like it's going to make the whole thing a dash more cinematic than it otherwise would have been.

"The career mode is housed in our fictional TV show," Milestone's Michele Caletti told us when we played the game in Cologne. "There are four bosses, you'll be running through the episodes, each episode has a theme. You'll be climbing up to beat the bosses in head-to-head fights. And then there's the final boss. The final boss is the winner of the previous year of the show, so beat him to be the new show master. It's something that allows us to blend new game modes, different locations, and different themes into something that's always very unique."

It wasn't long after we picked up the controller that we started getting Sega Rally vibes, but perhaps that had something to do with the fact that one of the first options we saw in the list of cars included in the game was a Toyota Celica, an old favourite of ours from our Saturn-playing days. It's not just the cars in the garage, though, as the bright and colourful visuals also evoked the spirit of Sega's classic off-road racing series, and if they can build on that it should put Gravel in a good position, because while there are a number of decent rally racers out there, the current trend is to lean more towards simulation, while Milestone's effort is unashamedly an arcade affair.

The handling felt nice and weighty, and we were quickly sliding around muddy corners and through checkpoints. Our first race was a Cross Country event where we were speeding over grass and earthy ground, the aim being to pass through a series of checkpoints before your opponents. The area we were racing through was huge - there were trees all around and long grass was everywhere - and on one occasion we completely lost our bearings and ended up well off the beaten track. While it took us a while to get to grips with each new car and surface, there is a rewind mechanic to ease you into things, the kind that makes purists feel nauseous, but one that casual racers like yours truly can use to undo a calamitous mistake and get back on track.

Our next race was perhaps the most impressive in terms of scale. In the Wild Rush part of the game you take to some unique-looking tracks, and in this case, we were completing laps around a course set inside a huge quarry. Mechanically speaking, there wasn't anything particularly remarkable about this mode, but we did like the setting and the twisting roads were certainly a challenge to navigate. Again, this fed into the TV-based competition, a setup that also lets you race in Speed Cross events (real tracks filled with jumps and chicanes) and Stadium (a mix of real and fictional) with Milestone looking to mix things up and keep the action fresh across the duration of the campaign.

More variety will come from the cars, and there looks like there's going to be a nice mix, with trucks and SUVs thrown together alongside both modern and classic rally cars (the latter of which should draw a smile from nostalgic genre fans, with rides including the aforementioned Celica). We sampled an admittedly small cross section, so it's hard to draw conclusions as to the overall quality of the physics engine, but Caletti‏ did have this to say when we spoke during our hands-on session:

"It's got a complete and realistic engine running underneath to give you good handling. The challenge is to make realistic physics and to be easy to pick up and play in an arcade way. So it might remind of some other titles of the past, but it's got a more substantial feeling while driving, and it's something you can really appreciate from the first moment."

We were told after our hands-on that there are plans for multiplayer, and we also got a glimpse of the customisation options whereby players can choose to race in adverse conditions or at night, further spicing up the action. If they can pull it together and find a balance between convincing physics and arcade thrills, then Milestone might end up surprising a few people with Gravel. With so many rally games looking to capture the spirit of the sport via uncompromising realism, it's refreshing to see a racer that's heading in a different direction.

Offline
Mike Holmes on the 18th of September 2017 at 16:25.
Here's hoping they can deliver the experience the demo hinted at. As a big Sega Rally fan back in the day, this looks like it could scratch a similar itch. 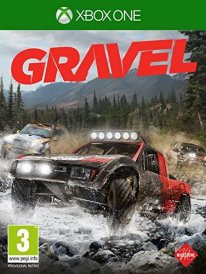