A new trailer for the anime fighting game Granblue Fantasy: Versus was released just yesterday because publisher Marvelous Europe finally revealed the European release date for the game, which is set to release on March 27th over here. In Asian countries, Granblue Fantasy: Versus has been available in English languages for a few weeks already, and North America will find it in store next week. Why developer Arc System Works took so long to unlock the game in European territories could possibly be due to the distribution of the physical Premium Edition.

In Europe, this particular edition of the game was cancelled at short notice "due to on-going problems in production", the publisher states in a presser. Other special editions are not affected, Marvelous assures while informing about a wide range of pre-order incentives regarding cross-promo options with the mobile RPG Granblue Fantasy.

Granblue Fantasy: Versus to release in Europe come March

We finally know Granblue Fantasy: Versus' European release date and the reason why it took the developer so long.

The studio's latest 3D beat 'em up is shaping up really well, and it's coming to the US next in early March.

This gives you a good look at the art style and the fighting that we can expect when the game lands next month.

The fighting game Granblue Fantasy: Versus is headed for Europe and is set to release early next year. 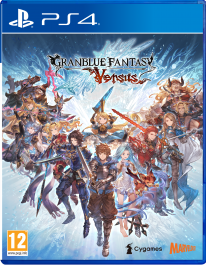