If you take a closer look at the more recent history of video games, there are few games that have truly revolutionised a genre as far as console games go. You may suggest games like Halo, God of War and maybe even Super Mario Galaxy, but perhaps the most obvious one should be Rare's GoldenEye on Nintendo 64.

The game was originally released in 1997 (so it's not that recent, but still played but lots of people), and at first it seemed like an obvious combination of the Bond license and the first person shooter genre, but if you gave the game just ten minutes of you time it was clear that it expanded the genre into an unknown territory. It's popularity really warrants a proper sequel, but this is where licenses and deals makes things murky. The game from 1997 was developed by Rare and published by Nintendo. This game in front of me is developed by Eurocom and published by Activision, but promises to be a faithful adaptation that takes the best things from the classic and enhances them with all the modern inventions of the genre.

The biggest and most obvious change is that Bond is no longer played by Pierce Brosnan, but instead he is played by Daniel Craig, and the charming gentleman is now colder and more cynical. And perhaps this opens up more options as it becomes clear early one that it is more effective to take a stealthy approach, than to go out guns blazing.

The first level is also indicative of how the rest of the game is laid out, as it starts out like the Nintendo 64 original, but then expands a lot from that. It's a fun idea, and if you remember how you played the original, it's a lot of fun being able to sneak across the bridge, steal a sniper rifle and take out the terrorist from a distance. The next section, where you have to escape in a truck you're not controlling yourself, and shoot at everything that moves, feels decidedly less exciting and less Bond like.

The mix of old and new locations carries on throughout the game, and it is very evident that Eurocom have done what they can do keep the best of the old, while they have been forced to adapt it to the expectations player have of games in the genre today. This means that levels are much longer than they used to be, but still with different objectives where you have to take photos or hack computers, before you have to flee from hostile troops.

Unfortunately Eurocom haven't been able to stay from additions such as slow motion shoot outs, driving sections, and quick time events, that have somehow found their way into the genre today. It should perhaps be expected that this would happened, but it feels tacked on, and adds very little to the experience. These sequences often feel boring and out of place, and depicts James Bond as a gun wielding Rambo clone, more than the thoughtful British agent we know and love.

But perhaps the biggest problem for this update of GoldenEye 007 is that the source material doesn't hold up as well as we would have hoped, and makes for a shaky foundation for a new game. There is no doubt that Rare's accomplishments were great back in 1997, but the level design is still very primitive in certain places due to the fact that the developers wanted to remain true to the original.

The experience isn't improved by the fact that Eurocom have chosen to put large portions of the game, in dark and rainy quarters, where it's hard to make out where to go next. It helps that you've got a radar with guiding arrows to point the way, but when it's hard to make out a doorway from the wall next to it, it's still not enough. It's really a bit frustrating as Eurocom show in other areas of the game that aren't as dark and gloomy that they really know how to push the Wii hardware. Beautiful lighting and weather effects create a good atmosphere, and I hardly experienced any stutters in the framerate.

The original Goldeneye 007 might have been fun alone, but its multiplayer is almost legendary - which means the pressure on Eurocom to include something special in this version has been incredible.

They've been very serious when they approached the task, and almost all kinds of options have been included. Most importantly you can play four players on one screen, which isn't helped by blurry graphics and few options.

But it gets a lot more fun when you go online, because it's there the game opens up all its options. Like in the rest of the package the developers have looked at what was included in the old game, and modernized it by adding a big dose of Call of Duty 4: Modern Warfare. You can create your own profiles, choose weapons and gadgets - even if you, of course, have to unlock a lot of stuff by collecting experience points by playing in the many multiplayer modes.

Conflict, Golden Gun, Black Box, Goldeneye and Heroes might be names that are really only covering up what are classic multiplayer modes like deathmatches or Capture the Flag, but they work wonderfully here. Sadly the developers' ambitions can be a big tough for the Wii-hardware to handle, and the frame rate suffers for it, which sometimes make the enemies pop up from out of nowhere. The possibilities are big enough though, and if you've already been addicted to multiplayer in games like Call of Duty 4: Modern Warfare, the chances are that you'll be addicted here as well.

You have to ask whether the fact that the game is based on an old classic limited the developers more than it inspired them. Whether you are a James Bond or not, it's hard to recommend the latest adventure with the gentleman agent instead of better and more well designed first person shooters on the console.

Fans of the original Nintendo 64 game haven't got many reasons to shift to this one, and fans of James Bond will find much more excitement in films and books.

Gamereactor UK
+
Great graphics at times. Excellent controls. Expanded levels. Tons of multiplayer options.
-
We've seen it all before. The additions made aren't all for the better. Boring level design.
is our network score. What's yours? The network score is the average of every country's score

REVIEW. Written by Thomas Blichfeldt (Gamereactor Denmark) on the 5th of November 2010 at 17

Activision and Eurocom are trying to bring back the magic from Rare's Nintendo 64 classic on the Nintendo Wii with Goldeneye 007.

The remake of the fan-favorite

No game would be complete without them

"This name is valuable, let's use it."

How do you update a classic? 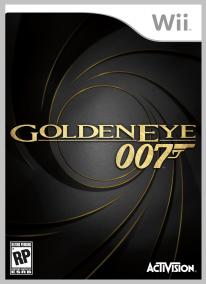