There are probably lots of you out there who have just finished Kratos' latest adventure and are dying to find out what happens next. But that's not what Ghost of Sparta offers. Much like its PSP predecessor God of War: Chains of Olympus, this is a prequel, or a side story if you will. It takes places shortly after the first game in the series. Kratos is a god of war, but not particularly happy, and he takes any excuse to go on a butcher spree. He finds out that his brother, Deimos, is still alive, and Kratos decides to try and find his brother and wastes little time in doing so.

At this point the series is starting to feel a bit predictable, but in many ways its a conscious decision. The first level on board a ship reminds me a lot of the corresponding section of the first game, but instead of dragging on its a level you are done with quickly that offers several intense moments where the sea monster Scylla wants to get up close and personal with Kratos and happens to tear the ship apart in the process.

And that's really the main attraction with the God of War series. It's linear and fairly monotomous, but you are constantly overwhelmed with intense sequences and varied battles. It's mixed up with slower passages where you climb ruins, solve semi-difficult puzzles and search for power-ups. The mix is always balanced, and behind every corner a new surprise awaits the player. The combat system is mostly as before, mixing the reliable blades on chains with various divine powers. But you will also be equipped with classic Spartan gear, spear and shield, at one time, which provides welcome variation.

After the introductory boat ride the journey takes us through temple ruins, besieged cities, and dark mountain passages on the way to the birthplace of the Spartan, and the road is line with mythological beasts that need slaying. And it's beautiful. When you run around in moonlit ruins you can find small flaws, but when the screen is lit up with fire and lava (most things are on fire in the game), and the character models aren't too close to the camera, then it might as well have been a prerendered movie from a few years back. The textures are pushing the limits of the hardware and the animations are brilliant most of the time.

What you can question is how suitable God of War is as a portable game. Apart from the fact the spectacular adventures such as this always come across best on a big screen, it's hardly something you want to play next to that old lady on the bus. Some bloody violence, topless female monsters, and ripped off limbs, and you've pretty much cemented every prejudice she may have had about gaming.

Ready at Dawn are together with Square-Enix those who best push the graphical capabilities of the PSP. With Daxter, and God of War: Chains of Olympus under their belt, this group of people founded by former Naughty Dog and Blizzard personnel, really knows how to make the most of the ageing portable hardware. They have publicly stated their wish to work on other platforms, but thankfully they stayed on PSP to create this game.

The only real negative, is that the game is a little bit too short. Best case scenario is that it will take you 5-6 hours to complete. But as usual there are a bunch of game modes to tackle after that, and they unlock bonuses in the shape of artwork. It adds some lasting appeal. As with the predecessor I have to bitch a little about the controls. To have to hold down both triggers and push the analogue to avoid attacks feels unnecessary. I also get the feeling that a larger percentage of the enemies are recycled this time around, even if new variations are constantly pouring out of Ghost of Sparta.

If the game had been a bit longer and somewhat more accessible controls the score would have been higher. But this is still an extremely well made and intense God of War experience that kicks the crap out of the competition and keeps the PSP alive for a while longer.

REVIEW. Written by Mikael Sundberg (Gamereactor Sweden) on the 26th of October 2010 at 11

Kratos is back in our pockets to give us more details of his bloody tale. Mikael has walked the path of violence and death on his PSP...

Ready at Dawn moving on

Kratos is live and kicking in Tokyo

God of War in PSP bundle

The next God of War on its way

More God of War on PSP 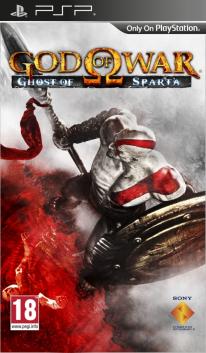