I was never a huge fan of G.I. Joe during the 80's. Transformers was always the more interesting of Hasbro's toy lines and the comic books. But there was a certain appeal with all the soldiers and the strong characters that made up G.I. Joe and their foes Cobra. There were cool martial artists like Quick Kick and Storm Shadow, the raving mad Dreadnoks, the mysterious siblings Zartan, Zandar and Zarana and relatively normal folks like Mainframe and Wetsuit. Bad guys are usually the most interesting and Cobra was no exception. Cobra Commander, Baroness, Destro and Dr Mindbender always seemed cool no matter what they did. And then there was Snake Eyes, a mute super ninja who mixed his katana skills with marksmanship.

I missed the first wave, men tried to catch up. The detailed pose friendly action figures were a hit in the playground and everyone had their own favourites. Huge battles took place and I was envious of the older boys with their original Snake Eyes or Destro.

And despite this popularity very few games have been made with the G.I. Joe license apart from some awful titles on NES and its 8-bit counterparts. One would think that such a colourful bunch of specialists would make an excellent starting point for a game. And that's where we are now with a new game to accompany the feature film.

In the press material released it has been claimed that the game is some kind of sequel to the movie. But without having seen the movie it is hard to see how they fit together given how little G.I. Joe seem to know about Cobra. Not that it matters.

The Rise of Cobra is a very straight forward and simplistic game. It is an old school shoot 'em up along the lines of Commando, Gunsmoke or Chaos Engine. For a few brief seconds this has me excited, it's a genre that always entertains in co-operative mode and there such a mode has been included. How could it fail?

Unfortunately it fails. The game is dumbed down to such a degree that it's turns into a parody. You can literally stand still, hold down the shoot button and let the most overcompensating auto-aim ever do all the work. It even picks up the superfluous power ups that are scattered in the backdrop every here and there. If you feel ambitious you can take a step to the left or right every once in a while and you take so much damage that it's never the least bit challenging. As a matter of fact you can play this game using your feet (I have tried it).

The Rise of Cobra might have been acceptable as a downloadable game for say ten dollars. At that price the simplistic and monotonous gameplay and the low production values could have been overlooked. But even as a digital download I would have expected a completed game. The Rise of Cobra is littered with small bugs, glitchy textures, cut scenes that make little sense where characters disappear at random and an artificial stupidity that surely must have been intentionally programmed to make Cobra seem like a crew of morons.

At the harder difficulty levels the game provides more of a challenge as the auto-aim is more of a bother than a help. It locks on to bonuses while gun towers eat away at your brain, and every so often you shoot at enemies off screen as the camera tries to make life difficult for you. It turns into a nasty piece of chaos that you just can't be bothered trying to control. I just press the button and let the auto-aim take care of the mess.

I looked long and very hard to find some kind of merit with this game. It is a plus that Shipwreck, that old pirate, has a parrot here as well. And it isn't painful to play as Snake Eyes (before he is stuck with the camera inside a HISS Tank and is insta-killed). And sure the two-player has the potential to entertain. And to play as some of the top dogs of Cobra could have been fun until I realise it's just more of the same. They haven't even changed up the enemies so apparently G.I. Joe have their own Viper soldiers. Sigh...

The only true joy to be had with G.I. Joe: The Rise of Cobra is laughing at how awful everything is. I can afford to do that saying as I didn't have to fork out a penny for this review copy. I doubt you will find it as amusing. For a fraction of the price you can pick up well made action romps such as Assault Heroes, Wolf of the Battlefield: Commando 3 or Burn Zombie Burn!, or you can take a walk down memory lane and pick up one of the true classics of the genre. But whatever you do steer clear of this turd!

G.I. Joe: The Rise of Cobra

The usual licensed piece of crap or something worth a closer look?

A video game worthy of the plastic?

G.I. Joe: The Rise of Cobra 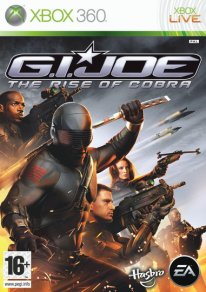