As previously reported, Ghosts 'n Goblins Resurrection is coming to more platforms, including PC, PS4 and Xbox One. Back then, we didn't get much information, nor did we know when will the game launch on these platforms. Now, thanks to Microsoft Store (via gematsu), we know when to expect this remake/reimagining of the classic series to arrive on more platforms.

It seems that Ghosts 'n Goblins Resurrection will become playable on Xbox One starting from June 1, however if you pre-order the game you'll get one day early access, which means you would be able to start playing the game from May 31.

Even though no words or other details regarding the PC and PS4 editions were revealed, presumably these two versions will be available along with the Xbox version.

Ghosts 'n Goblins Resurrection initially launched on Nintendo Switch February this year, you can check our thoughts about the game via this link.

This classic series has risen from the grave and has embraced several modern features.

Ghosts 'n Goblins Resurrection will land on PC, Xbox One and PS4 in June

If you pre-order the game you will be able to play a day earlier.

This includes PC, PS4, and Xbox One.

The revitalised classic is the focus of today's stream.

The colourful new trailer has revealed that the game will have four difficulty modes.

The gameplay was given to us in the latest episode of Capcom TV.

Another Capcom classic has been reborn for a new generation. 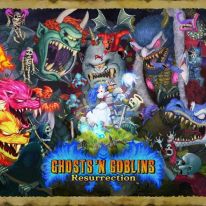