During the second Guerrilla Collective E3 event today it was revealed that cyberpunk hack-and-slash Ghostrunner would be receiving a physical release on Nintendo Switch on June 30. The game has been out on the platform since October last year, but it has yet to see a physical release until now. No word was given as to whether a physical release will arrive for PS4 and Xbox One.

You can take a look at the box art for the Switch version below and you can pre-order yourself a copy here.

"The fast-paced movement mechanics, tasking timing requirements and combat systems, combined with the varied enemies make for a challenging yet fulfilling gameplay experience."

It also received a new trailer at the second Guerrilla Collective E3 showcase.

Ghostrunner slashes onto PS5 and Xbox Series in September

Ghostrunner is getting a new roguelike mode in a future update

It will also be receiving an assist mode that will offer a more relaxed experience.

The deal also includes "all licenses for the technological solutions used in the game."

The cyberpunk hack and slasher will be parkouring its way onto our stream later today.

Players on PS4 and Xbox One will also be eligible for a free upgrade. 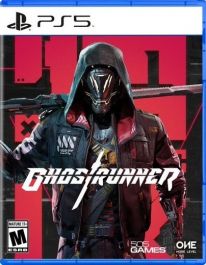