Previously this week, the American PEGI equivalent called ESRB had suddenly age-rated a game called Ghost of Tsushima: Director's Cut. We suspected we would get a swift announcement with the cat out of the bag, and surely enough, late yesterday it was revealed.

As ESRB already had leaked, it is coming for both PlayStation 4 and 5, and is doing so on August 20. Sucker Punch writes on the PlayStation Blog that we will get to visit a new island and says this regarding what we should expect:

"If you're a history buff, you may know that in addition to Tsushima, the neighbouring island of Iki was also invaded during this time period. Today we're excited to reveal that a whole new chapter in Jin's journey is coming and will take place on Iki.

In this new story, Jin travels to the island to investigate rumors of a Mongol presence. But soon, he finds himself caught up in events with deeply personal stakes that will force him to relive some traumatic moments from his past."

The PlayStation 5 version will also render the cutscenes in real time, "offer lip sync for Japanese voice over" and also have "4K resolution options and framerates targeting 60 FPS" as well as faster loading. 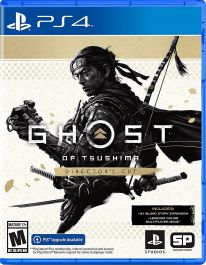