It wasn't too long ago that developer Milestone hosted us at an event in London to show us three upcoming games, all of which had their signature racing stamp on them: MotoGP 18, MXGP Pro, and Ride 3, the latter of which was actually revealed to us for the first time at the venue. While in London we also had the pleasure of talking with Michele Caletti, R&D programmer, who talked us through all three games and what their aims were with them.

Let's start with MotoGP 18, which is racing our way on June 7. The game has been completely rehauled from the ground up in Unreal Engine 4, meaning that everything had to be remade using this new engine. These games have never looked bad (indeed, these types of racing games are all about the shiny visuals), but Unreal 4 pushes things even further and lays a great foundation for years to come.

"Besides the obvious - so the visual improvements in the game that you're going to find more refined and more detailed - there are many things that you might not expect," Caletti told us. "For example, the physics now - you can feel the weight of the bike much more and it reacts more to the tweaking of the suspensions and all the details of the bike you can modify."

What else is new this time around though? Well, in career mode we'll get to tweak and modify our bikes based on realistic tests, similar to how real-life racers do it, but also the AI has been changed and can be tweaked to be made way more challenging and competitive for those who want it that way. Traction control has also been made easier for new players too if they want a more accessible experience, so it's built for both seasoned riders and newcomers to the series.

Next up there's MXGP Pro, a game that's all about the offroad action, moving away from the smooth tarmac of MotoGP and into the woods with all the bumps and the hills you'd expect from MXGP. It's all centred around making sure you have the best chance of staying on your bike as well as coming in first place, which is easier said than done (as we demonstrated in the gameplay video down below).

You might be wondering why it's not called MXGP 4, and that's because there's a new approach this time around. "The metaphor that I try to use is that last year was covering something like from one to eight [out of ten] in terms of complexity, simulation you can achieve, and this time it's from one to ten, so if you like the easiest setting you can stay on that, but only with better content, better graphics, more customisation," Caletti explains.

Again, it's not all about the newbies, as veterans have things to look forward to as well, including more complex handling, being able to feel the difference between various types of surface under your wheels, as well as different types of bikes so that you can get a range of experiences, like two-strokes as opposed to four-strokes. You can even remove the rewind feature (which allows you to go back in time and rectify a mistake) for an extra dash of challenge.

The Compound is perhaps the biggest change though, as it has been made larger in comparison to MXGP 3. Here it features a small sandbox in which you can practice races, jumps, and more in a number of different areas, ranging from smooth roads to the dirt tracks you'll be facing in race events. There are no restriction on where you can go, and this part of the game has been built to facilitate what Caletti calls a "no stress" situation for players.

Lastly comes Ride 3, which is actually the only game we didn't get to play. Despite that, it's perhaps the most exciting, as Ride and Ride 2 were huge successes for the studio, and it stands as one of Milestone's most important IPs, especially since a third installment has long been requested by the community of players that have built up around the first two. With a new entry comes more content and more improvements, as explained by Caletti below:

"We're trying to make a game that both captures the good mood of the others, trying to expand what was good, introducing new things like the night races or expanding the customisation, making you able to create new liveries and you can share them online. So there are things we know people want, and we try to follow that path [...] basically we're going in the direction the fans are asking, but we have an idea also to create a culture for motorsports."

What Caletti means by this is that the career is made up of volumes, books dedicated to various bikes, all of which have different themes that teach you about various kinds of bikes and the eras they hail from. If you want to just pick a random bike and have fun, however, that's also something you can do. Milestone wants Ride 3 to go "beyond being a simple game", instead they want to tell the stories behind the bikes.

In short, it seems as though fans of two-wheeled motorsports and their video game equivalents have a lot to look forward to in the coming months, whether it's hurtling down the tarmac around MotoGP circuits, taking to the muddy jumps in MXGP, or seeing what awaits in the third entry in the Ride series. Milestone has a history of success on the track in all these fields, so you'd be excused for expecting more high octane racing action from the bike maestros once again. 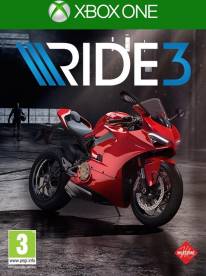