Last week we reflected on the superlative Grand Theft Auto IV. This week we up the frame-rate, reduce the amount of freedom, and look at the shooter that spawned a multitude of clones: Call of Duty 4: Modern Warfare.

Call of Duty 2 was a real highlight for many, us included, but the series stumbled badly with Call of Duty 3, and the signs weren't good for its long-term longevity. Happily this wasn't the end of the franchise, and with Modern Warfare Infinity Ward managed to give the series a much needed shot in the arm, and CoD has never looked back since.

For us it's not start that defines the game, nor that moment where the nuke goes off and our player character crawls from his downed helicopter to die on the floor. Our defining memory of the game comes from the final mission (not the bonus at the end on the plane - the bit before).

That last mission, storming the underground base to deactivate the pair of recently launched nuclear warheads before they land on the US of A, will forever be etched our minds. Part of that memory comes from the intensity of the story - it was a whirlwind narrative and that mission formed its satisfying conclusion - but it's also so finely engrained in our minds because when played on the hardest difficulty setting it was an absolute beast to complete.

We still remember every corner, every piece of cover, ever shotgun wielding enemy that needed to be avoided, every carefully thrown grenade, every single damned headshot. For hours we ran into countless bullets, experiencing what felt like thousands of restarts. The expiring countdown of the clock meant no resting on laurels, you always needed to push forward with haste, balancing recklessness with accuracy and all the while hoping for just a little bit of luck.

Getting through the underground tunnels, disarming the nukes and escaping the facility led to a chase scene. Clinging to back of a jeep with our comrades, it was time to make good our escape. Whilst still a solid challenge that demanded several restarts, it wasn't anywhere near as tough as what had just been endured.

It was an end befitting an epic shooter. Whilst it was pretty straightforward stuff, a very linear experience, the game was the best example of its kind up to that point.

After an explosive finale Zakhaev stands over us ready to pull the trigger, but just in the nick of time Price slides over a handgun and we're able to take our enemy down along with his entourage. Head-shots FTW. Seconds later (and seconds too late to help) the calvary arrives to whisk us away to safety, at which point gamers across the world let out a collective sigh of relief. It'd been a tough job - but someone had to do it.

It was a ferocious ride, one fraught with tense action, full of memorable missions (All Ghillied Up and Mile High Club anyone), a brilliant training mission and a cinematic introduction to the story that stuck in the mind long after the credits rolled. And of course there's the multiplayer - a facet of the game that would go on to make the series the world beater that it is today.

The series entries that came before might have provided the formula, but it was Modern Warfare that would truly define the franchise, and create a template that later games would follow closely (perhaps too much so). We loved it, and it cemented an affection for the series that stands to this day. Whilst more recent iterations may be bordering on dull, it's only so because Modern Warfare was so near perfect that subsequent releases have had to border on outrageous in order to outdo their illustrious predecessor - in doing so they lost their gritty edge. Other CoDs may have refined and improved certain areas, but for our money Call of Duty 4: Modern Warfare stands as the pinnacle of the series and one of this generation's greatest moments. 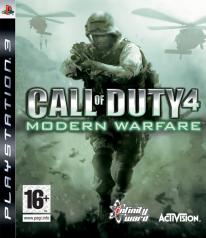