Modest. A strange word to use in application with a series that's the video game equivalent of Predator: an Epic sci-fi blockbuster with testosterone-fuelled muscle men using an increasingly-heavy arsenal to combat a superior alien threat.

Yet revisiting the original Gears of War nearly ten years after its Xbox 360 release, and filtered through the experience of its two superior sequels, that's the word that springs to mind. The escalation of set pieces feels oddly conservative, the basic building blocks - square and rectangular areas with angular cover points laid out with mechanical precision - evident as Epic feels its way round what it'd later perfect and competently disguise. Simplistic and rigid locations would give way to more complex yet fluid level design, necessary come 3's four-player campaign. Here, as with the sequel, it's two-player only and chapters feel smaller.

Not that the game arrived half-formed: the first title nailed the formula. Later games would just add more to the mix. A decade on and there's still a satisfying weight to the characters as you roadie-run and slam into the nearest cover. Weapons - all weapons - have a satisfying bite to them. We know some people detest the art style. Improbable muscle mass aside - but maybe they breed 'em big in the future - we're a fan. Attack helicopters, tanks, even the Locust creatures are all distinct. You know your different grub types at a glance, and react accordingly.

New Gears steward The Coalition has polished the game world, tinkered with the graphical style to clean it up for the new-gen debut. But it's less the lack of grit and rougher edges that's impressive. This is still a dazzling game. Granted, immediate locations feel empty and don't carry the flash fully-realised worlds demand today, but the beauty of the cathedral-like design in the war-torn cities you fight through still stands strong. The gradual shift from day to night as your campaign progresses only illuminates the talent of Epic's art team through lengthening shadows. Only when we duck into a prolonged sequence through a car park - this era's version of the mine cart level - do we feel the art team went on a quick fag break. The area's part of a chapter once exclusive to PC owners that's now rolled into the Xbox One release.

It feels a little unfair and slapdash at times, Locust spilling out of doors in greater numbers and in unexpected places and the battlefield's layout not feeling quite as smooth as other parts of the game, but you can't argue with The Coalition's faithful replication of the full Gears package. That does mean the story hasn't been tinkered with. By now a great deal has built up around this world, with sequels, comic book tie-ins and novelisations filling in the blanks, but despite its potential depth, the games never could amalgamate dense background story with the rapid-pace of gameplay.

The original's basic arc somehow still manages to be confusing as - back then - new setting and lore aren't imparted on the player. More than once we questioned our overarching objective before settling back in to the immediate matters at hand. But that Epic's greatest trick; creating an involving cover shooter that moves with the speed and deadliness of a cracking whip - more so in multiplayer. Gears mightn't have the investment in its lore that Halo does, but it's arguably got as fantastic a gameplay loop as Microsoft's other sci-fi series. We know we found it very hard to pull ourselves away from the controller despite this being a retread of sorts. (Though nearly ten years hasn't lessened how much we despised the General Ramm fight). And as with Halo, Gears proves even better with a friend.

We'd tried dipping into multiplayer numerous times prior to the game's launch only to be left waiting on the "searching for players" screen. It's only in the last few days that competitive's showing healthy signs of life with the level-count for some players already marking their dedication to working up the ranks and trumping all comers. There's a decent range of modes and plenty of maps to chew into, though we wish The Coalition had worked in not only a Casual mode to give newcomers some training (you feel the MP lobbies are filled with Gears vets waiting to serve some harsh lessons, and now more than ever the game may be unwelcoming to first-timers) but also used some arcane magic to get a Horde mode in place - the wave-based co-op that's been continually emulated and in which we spent the majority of our post-campaign plays with friends over our years of Gears.

Yet that doesn't mean you have to go without, and leads us on to our last point. Remasters and re-releases of previous generation titles come with a degree of expectation when they're part of a larger series. People expect a comprehensive package - such as the Master Chief Collection (but without the buggy launch) - when talking of bringing a franchise with a trilogy or more titles under its name to a new generation of consoles. While remastering the entire series to date would be a headache for a studio that's supposed to be focusing on the future, they've found an excellent compromise through Xbox One's backwards compatibility. Gears of War is a very good game, but its sequels are much better.

When you factor in buying and playing this game before the end of the year gains you free downloadable tokens for the three other Gears games - including side-title and prequel Judgement - to download and play when BW kicks in this autumn, it pushes this from being a great game to being an excellent compilation. If you've never played the series until now, prepare for overkill (though we're reserving full judgment until the titles release and we get to test if they and their multiplayer modes work flawlessly on Xbox One). And even if you have, having the entire collection as one easy to launch gameplay session from your Xbox One Guide is a very nice bonus. 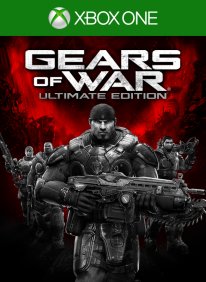