The Elder Scrolls games are notoriously few and far between. The Elder Scrolls V: Skyrim was released back in 2011 (and ported to every single system on the planet since), and aside from a relatively ambiguous reveal at E3 2018, there's no Elder Scrolls VI in sight. But before Skyrim though there was 2006's Oblivion, a game that had a lot of ambition and a lot of charm, even if some of its features haven't quite stood the test of time.

Going into Oblivion was no easy task for Bethesda, as the previous Elder Scrolls game - Morrowind - was a critically-acclaimed RPG with plenty of fans. That's why the stakes needed to be raised, and Bethesda improved several areas with this iteration, which was releasing on the next console generation after Morrowind.

AI was one of the areas of improvement, and while it provides plenty of meme-able moments when looking back on it, the Radiant AI system did allow for a more immersive experience. NPCs would walk around and talk with each other, have their own conflicts, and the world felt more alive because of that. You were a part of a living and breathing world, one that changed depending on the time of day and - more importantly - your actions.

Speaking of the world, this in itself was a joy to explore. A lot of people talk about how memorable it was when you first left the sewers (the tutorial section during which time you meet Uriel Septim, played by Patrick Stewart), as there was suddenly this huge world to explore, and it was seemingly without limits. You could walk off and encounter the biggest beasts imaginable if you wanted, or simply wander into the Imperial City to see the hustle and bustle - the choice was entirely yours, and it was borderline overwhelming.

The improved draw distance helped a lot with this too, as you could really feel a sense of scale as you wandered towards that elusive point on the horizon. Everything you see you could walk to, and compared to Skyrim after it, there was a lot more bright and vibrant colours throughout the world in Oblivion. Dungeons, caves, ruins, and more were awaiting for those who went off the beaten path, but there were also dangers for those who dared to try and find the elusive treasures in Cyrodiil.

Basically, there was just a lot to do in Oblivion, and for an RPG that's definitely a good thing. Those who explored areas at random had a lot to discover, but there were also plenty of quests in the main story-line (featuring celebrity talent like Sean Bean) and beyond, whether those are the memorable standalone quests like Through A Nightmare, Darkly to other quest-lines like the Mages Guild, Dark Brotherhood, and Thieves Guild.

Completing these would let you build and shape your character, and there were plenty of other ways to play the role. Armour, weapons, and other equipment was laying around the world for you to find, earn, or steal, and performing tasks naturally levelled up your skills in certain areas. As you played you organically improved yourself, allowing you to perform more advanced actions and become the hero you always dreamed of being.

Combat isn't always necessary in Oblivion, as there are other avenues like persuasion that you can attempt, but there are plenty of options when fighting too. Those who like a stealthy approach can equip themselves with light armour and daggers/bows, but those who want to go in a bit louder have heavier armour and weapons like maces and warhammers to savour. These aren't limiting choices either, and you always have the choice to switch between styles as you see fit.

Of course, you could always improve your weapons and gear with a bit of enchanting, and to do that you needed sigil stones. These powerful artefacts were found on the other side of the ominous-looking Oblivion Gates that populated the world, and it was up to you to head through these gates, taking you from Cyrodiil to the Daedric planes in search of mystical rewards. These gates may have looked like the Eye of Sauron, but they actually offered a gateway to a totally different world, and this regular chance of pace helped keep the experience varied and fresh.

Finally, who could forget the brilliant audio in Oblivion as well, produced by Elder Scrolls veteran Jeremy Soule. Admittedly, the voice acting did produce some rather cringe-worthy moments and there were a bunch of repeated phrases, but the gorgeous music from Soule made up for that and produced an iconic experience that takes us back whenever we hear it now.

It's easy to look back at clips of Oblivion now and think it's jagged and wonky and all about horse armour, but for the time it really pushed the boat out for RPGs and changed our expectations about what a fantasy world could and should be. For all its flaws, it was an ambitious title with a huge, vibrant, and interesting world to explore for hours on end, and while it hasn't been ported to as many systems as Skyrim, one might argue it has a touch more personality than the 2011 game. All that remains now is to wait (very) patiently for Elder Scrolls VI to come around, and see if it can bring us that same sense of wonder and amazement once more.

Thank you for your time. We will take care of this matter as soon as posible
Oblivion sits high on my all-time top list. I hate to imagine how many hours I put into this as I'm sure it isn't socially acceptable, but I don't regret a moment. From leaving the sewers and stumbling around the open world to saving the world and becoming a demi-god (or god - over to you lore experts), the progression always felt very natural. Likewise, discovering quests, dungeons and Daedric shrines also happened very organically. Heck, even exploring a settlement such as Leyawiin or Anvil felt suitably involving.

Don't get me wrong, I love Skyrim, and have actually spent more time in that game than Oblivion, but Oblivion is better. Skyrim trumps it in almost every sense, even modding, but Skyrim has nowhere near the heart, the narrative drive, or the same sense of discovery.

Enemy types and designs beat Skyrim as well. Minotaurs, dreughs, even the scamps are much more intriguing than undead Draugr ever get.

Objective variety is better too. I don't remember a murder mystery questline in Skyrim, nor that time you got sucked into a painting - or when you entered a hell-dimension. All those and more exist in Oblivion.

A huge reason I love Oblivion is because I never knew what to expect. That rarely happens in Skyrim (Sanguine quest aside), in that game, it was more "So your grandad lost a jewel in a Dragr infested dungeon? I'll add it to the list..."
Thank you for your time. We will take care of this matter as soon as posible
I know what you mean, Baltharan. I played Oblivion so much back in the day, and it remains my favourite Bethesda game (or maybe it's Fallout 3, they're pretty much neck and neck for me). 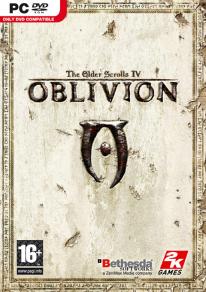