"I had a dream of my wife. She was dead. But it was alright."

There are games that fit their genres and then there are games that define their genres. Remedy Entertainment's Max Payne 2: The Fall of Max Payne is an example of the latter with its incredible narrative, its grand, film-noir style New York City setting, fantastic gun-play, groundbreaking gameplay mechanics, and amazing visuals. All of these factors have been praised by critics and gamers since its launch but despite releasing to positive reviews it didn't get the reception sales-wise that it deserved.

Few have nailed a dark narrative the way Remedy Entertainment did with the Max Payne series before parting ways with its publisher Rockstar. The studio has carried on making gloomy, somewhat reality-bending experiences since then with gems such as the Twin Peaks-esque horror gem Alan Wake, the time travel action saga Quantum Break, and the upcoming Twilight Zone-inspired action game Control. Following Remedy Entertainment has been a pleasure since the studio's early days and just like the rest of the film-noir enthusiasts, we're excited for what the future holds, both for the Max Payne series that has been lying dormant for some time and for the studio behind it.

Max Payne 2: The Fall of Max Payne follows its titular character, the apathetic, pill-popping, whiskey-drinking, now reinstated detective Max Payne, as he inflicts pain (or Payne, if you will) on bad men. As the original game's narrative informed players, Payne is a broken man after having his family, wife Michelle and daughter Rose, taken from this world too soon in an apparent break-in turned violent. The outcome of this being Payne killing the three intruders as he walked in on the (later confirmed) hitmen. Following the protagonist's hunt for the individual responsible for calling the hit on his family, Max Payne 2: The Fall of Max Payne offered a different narrative tackling a different side of the noir genre. From retaliation and corruption, Max Payne 2 focused on Max and his difficult relationship with femme fatale Mona Sax - and Remedy executed this exceptionally well.

The series took players through his emotional turmoil as they followed Max through various distressing scenarios with the outcome being him teaming up with and eventually falling, albeit reluctantly, for the murder suspect and fugitive that was Mona Sax. The two, sharing a past with Mona being tied to the events of the first game, have a difficult relationship and we found the narrative and the handling of the relationship between Max and Mona, and even between Max and less prominent characters, to be wonderfully complex and absolutely extraordinary. There were very few studios that could compete with Remedy's narrative depth at the time, and with Max Payne 2: The Fall of Max Payne the developer raised the bar for storytelling in video games.

Apart from the fact that the game spins a compelling yarn, the Max Payne series is known for something a bit more action-packed as well - bullet time. As the first game to introduce the concept, Max Payne changed the game, so to speak. In the original, the mechanic was mostly used as a way to get out of harm's way by slowing down time and launching the player in any direction while letting them fire back at their attackers. As time was slowed, so too was Max's movements except for his arms, which could move freely in order for him to kill some gangster bastards. In the second game, however, the mechanic was built upon. Bullet time was upgraded in order to make it a feasible option for both offensive and defensive play, with the added ability to stay on the ground after launching oneself through a hail of bullets. Max also now had the ability to run around and enjoyed the very welcome addition of a combo-system that was put in place to ease the frustration of gunfights that were essentially Max vs a private army. With this system in place, the bullet time meter changed colour from the traditional white to yellow after Max had killed enough people, boosting his speed when in bullet time.

So, to sum it all up, Max Payne 2: The Fall of Max Payne was a sequel in its truest form. The game built upon and complemented the original well, sticking with the overall feel of the debut title. The film-noir design was as present as can be with the impeccable setting and gorgeous comic-strip inspired cutscenes, and the written narrative and the execution of it was truly groundbreaking. The developer was flirting with deep existential questions with a lot of the monologue being read out as if every written line was pure poetry, all coming from a broken man. A man so broken, in fact, he ceased to fear death and the consequences that would follow his actions in a harsh New York City. Max was, however, a passionate soul, caring for the people around him even though he'd prefer not to. To put it in the words of Payne himself:

"Death is inevitable. Our fear of it makes us play safe, blocks out emotion. It's a losing game, without passion you are already dead."

ARTICLE. Written by Lisa Dahlgren on the 3rd of February 2019 at 08

The Fall of Max Payne hit players hard with its convincing, dark narrative way back in 2003.

Rumour: Rockstar bringing a bunch of classics to PS4

Including GTA, Max Payne, and more.

Offline
GR®
Mike Holmes on the 6th of February 2019 at 09:12.
Thanks for the catch, we've tweaked the intro to reflect the correct date. Sorry for the mistake! 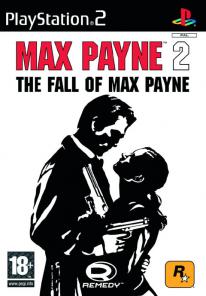