When you hear the names Traveller's Tales and TT Games, you'll probably instantly think of one of the many Lego games that the company has created over its 20+ year course. Yet, when asked which is the most memorable Lego game to have ever been released, we can't help but think about Lego Star Wars: The Complete Saga. Sure, at this point there are newer games in the series with fancier mechanics and flashier graphics, but none of them has impacted the industry or the studio in the same way that Star Wars did.

Lego Star Wars: The Complete Saga, which landed all the way back in 2007, was a product of combining the first two licensed Lego games together, namely Lego Star Wars (2005) and Lego Star Wars II: The Original Trilogy (2006). What came from it, however, was a masterpiece which acted almost like a base for many of the studio's titles to come. One of the reasons that this became such an important milestone for the developer is because it showed that it was capable of making fantastic games at a consistently high level, which was especially impressive considering it was playing around with such a monstrous IP in Star Wars. The developer was no longer a small player in the industry. In fact, the success of the Lego Star Wars games opened up doors, giving the studio unfounded access to many high-profile IPs, something which remains the case to this day.

So, what exactly made The Complete Saga so brilliant? First of all, the game was created in the era when Traveller's Tales still didn't use dialogue. Due to this, the creativity of the short cinematics and how the characters interacted with each other was elevated to a point which we don't see replicated anymore. This itself paved way for some of the most diverse and humorous portrayals of the Star Wars universe we've ever seen. The slapstick comedy resonated through the game, like when we watched a Stormtrooper give another Stormtrooper a nuggie whilst Han Solo escapes Tatooine with Luke and Ben Kenobi - these moments have stayed with us.

Another reason why The Complete Saga was so fantastic is that it had so much content to play. You could spend hours upon hours unlocking every character and collecting each mini-kit in the game, or you could dive into the co-op mode and mess around with a friend, online or local. Alongside all this, The Complete Saga was also one of the most accessible games in the wider Lego series to be created. No matter their age, anyone could easily jump in and enjoy what the game had to offer. Whether you were a child, a teenager or even a grown adult, it was equally enjoyable and all we ever wanted to do was jump back in and play some more.

It was the very fact that Traveller's Tales managed to achieve all this which such a treasured IP that set them up for greatness. Today, we've seen them work with Pixar, DC, Marvel, Harry Potter, Lord of the Rings, Indiana Jones, Rock Band and a host of other IPs in their Dimensions game (such as The Simpsons and Doctor Who). How many other developers have been trusted with all these stand-out names and still succeeded to create great games? Can you think of one more qualified than Traveller's Tales, and might they be the most trusted developer in the business?

When the studio was developing the Lego Incredibles game, for example, we were able to speak to Nick Parks from the studio and during our chat we were given some insight to just how much trust Pixar put in the developer. Parks told us that "they send across scenes... everything from storyboards all the way up to finished scenes. They send us through loads of reference images and even some models". It just goes to show the faith put into the developer when a huge animation studio like Pixar is willing to work so casually with them because they are just that good at what they do.

We fell in love with Traveller's Tales back when we first played The Complete Saga and even back then we could feel the passion that the team pours into the games that they make. We still feel the same way today when we play DC Super Villains or The Incredibles. However, nothing quite beats the first time you play a Lego game and, for us, that was Lego Star Wars: The Complete Saga, a title that not only played a key role in defining the studio but that also upped the ante for family-friendly gaming in general. 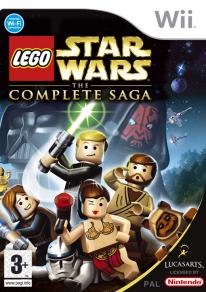