Hidetaka 'Swery65' Suehiro is one of the most famous Japanese developers, having just announced his collaboration with Goichi 'Suda51' Suda on Hotel Barcelona, a horror game inspired in part by Twin Peaks. This wouldn't have been possible without another game with similar inspirations, however, which is Swery's Deadly Premonition, a game that is, in fact, getting its own sequel next year called A Blessing in Disguise.

Deadly Premonition was first released in 2010, but having just finished the Origins edition - which saw the adventure re-released on the Nintendo Switch - we thought it was a good time to look back at what made the original such a cult classic, so that we can get ready for the sequel and the other ideas that Swery has in mind for the future.

If you ask anyone about Deadly Premonition, they'll say it's certainly a unique game. Many releases can claim to be unique in their own way, but there truly is nothing like Deadly Premonition out there. To the untrained eye it's a slightly ugly, messy game that resembles a B-movie whodunnit rather than a supernatural crime thriller, but there's way more going on under the surface, beneath the jagged edges.

It's true, even for a game in 2010 it doesn't look great. This is especially clear when playing on a big screen in 2019, with the character animations wonky, the facial movements looking comically off, and the voice acting being bizarrely inhuman, but ironically this all adds to the weird and wonderful charm of the game. Its delivery has become iconic for how original it is, and it serves to draw you into the twisted world of Greenvale.

For a horror game, it's not all about the scares either. Half of the game sees you explore the sleepy town and talk to the various residents to get to the bottom of a murder, and this is where you're sucked into the life of this town. You have to drive places, eat, sleep, and even do side missions to help people out, and soon you'll grow to love certain members of the community as you go.

The other half of the game, however, is where the horror comes in, and this forms the backbone of the experience; the driving force behind the plot. At regular intervals, the world around protagonist Francis York Morgan (he likes to be called York) changes into more of a nightmare, with undead monsters rising from the ground to attack you as you solve puzzles and collect clues to unravel more of the case. When all is done the world returns to normal though, and you're thrown back into Greenvale as if nothing had ever happened.

The horror elements are perhaps the strongest parts of Deadly Premonition, epitomised by the rare sightings of the mysterious Raincoat Killer, who shows up in quick time events to try and kill you. There are even incredibly tense moments where he walks around to try and uncover your hiding spot in a room, requiring you to hold your breath at key moments as he lumbers along with his giant axe.

It's a survival horror as well, which means you have limited resources and must explore to find food, weapons, ammunition, health, and more. York also has a stamina bar, which means he can only run and hold his breath for limited amounts of time, the latter of which you need to do to evade zombies.

At the center of this charming horror game is York himself, who is eccentric to say the least. He's constantly proving himself awkward in social interactions, and weirder still is the mysterious Zach who he keeps talking to in his head, conferring and confiding in him, much like Cooper does in Twin Peaks with Diane, his tape recorder.

He's also constantly tapping his tie, smoking cigarettes, and making predictions based on the coffee he's drinking, so he's far from your everyday hero. In fact, all of the townspeople are special in their own way, and York just comes in to offer a 'city' perspective into the idiosyncrasies and traditions of this small town.

It's hard to put a finger on exactly why Deadly Premonition is so beloved. From a technical perspective, there are a lot of shortcomings, the visuals being just one of them, but Swery brings all the parts together to shine in spite of - and maybe because of - their faults. That's what makes us so curious about a sequel with a bit more polish, and a collaborative effort between himself and Suda51 of No More Heroes fame. Whatever happens, we know both projects will certainly be worth talking about.

With Swery65 gearing up for a sequel and a collaboration with Suda51, we look back at his cult classic horror game.

We play the opening of Deadly Premonition: Origins

The first game released on Switch as soon as the sequel was announced, and we revisited the mystery. 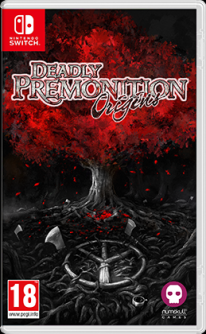