If you were to rewind time back 20 years, you'd find yourself in the midst of the Dreamcast era. Sega, while no longer at the height of its powers by the time the year 2000 had rolled around, was still in the hardware business. The Mega Drive was obviously Sega at its peak, but things can change quickly in this business and the Saturn's successor was to be last home console that the company brought to market. Since then it has mostly been a diet of Sonic and strategy for the platform holder-turned-publisher, but there was a time when Sega made great games for its own consoles, and one of the all-time greats was Crazy Taxi.

The first incarnation of the game hit arcades the year before, back before the Millennium Bug had us worried about a potential upcoming technological disaster, but for most of us, our first meeting with Sega AM3/Hitmaker's drive 'em up wasn't in the arcade, it was at home in front of the TV with a controller in-hand (also, let's just pause for a moment and remember how cool the Dreamcast controller was with its removable mini-LED screen).

3D gaming was very much up and running around the time when Crazy Taxi picked up its first fare, but we were still a long way from the smooth implementation of 3D graphics that we enjoy today. That said, Sega made up for any rough edges by giving the game an insane dose of attitude, with funky drivers and a colourful, vibrant world to cause chaos in. As you rip up and down the city streets, there's a strong sense of San Francisco, with its steep hills and sharp corners, and of course with the coastline edging this proto-open world sandbox.

There are four main drivers available to play upon booting up the game. Age hasn't done wonders for Gena's "5EXY515" license plate, but between Axel, B.D. Joe, Gena and Gus, there's plenty of in-yer-face attitude on display. The atmosphere is helped - nay, it's defined - by the pumping soundtrack, which featured '90s punk titans like Bad Religion and The Offspring. The guitar-heavy OST, the poppy colours, the breezy atmosphere - it all came together to create one of the most vibrant and welcoming games imaginable.

Except it wasn't welcoming. Not at all. Crazy Taxi was as hard as nails, and our memories of a stern challenge proved accurate when we recently booted up the game. The punishing Arcade mode insists that players hone their approach with the sort of relentless pressure that would make FromSoftware take note. You can either play for a fixed period of time and cram as many lifts in as you can before it runs out, or there's the Arcade mode, where your dwindling time is supplemented whenever you pick up a new fare, however, it only takes a couple of mistakes out on the busy roads to put you out of action and back at the start of a new run.

You need to drive perfectly, slipping past cars just close enough to get a Burnout-like bonus, but there's traffic everywhere and obstacles are strewn throughout the world to make things even more challenging to get your customer to their destination of choice. We're even tempted into taking additional risks, with ramps positioned surreptitiously around the world that are just begging you to hit them at full speed. Risk means rewards, but in Crazy Taxi, it also means ruin, and failure will try to flag you down at every corner.

Yet this challenge is what makes Crazy Taxi such a definitive game and a fan favourite that we're still talking about two decades later. It sits, engines revving, at the intersection between old-school arcade design and the technological advancement that would go on to define the following twenty years. The result is an unashamedly punishing game (that evokes the spirit of Sega Rally by revelling in your failure and taunting you to do better at the end of each run), but one that's simple enough that anyone can pick up and start having run straight away.

It might not have aged brilliantly, but two decades after its first release, Crazy Taxi still has that special something that makes it worth taking out for a spin, and it stands tall as part of the Dreamcast generation, the final batch of first-party console games that Sega made for its own hardware. That alone marks it out as a noteworthy title - a milestone on the road - the fact that it's stylish and challenging and heaps of fun is just the cherry on top.

REVIEW. Written by Gillen McAllister on the 24th of November 2010 at 10

The Dreamcast revival rages on... 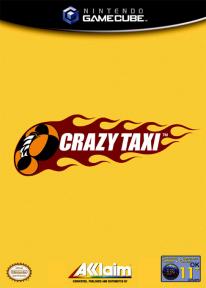