Fuse was first shown at E3 2010 under the name Overstrike, but disappeared off the radar soon after, leaving gamers to wonder what happened. Then, last autumn, the game finally resurfaced with a fresh now look and a different title. The colourful and exaggerated cartoon graphics had been ditched in favour of something that looked like your average generic futuristic shooter. The first hands-on sessions, however, showed promise and introduced us to entertaining weapons - something Insomniac Games has always been known for. It was with mixed emotions that I picked up the review copy, was I about to be disappointed?

The core of Fuse is your typical third-person shooter, where you move from cover to cover shooting at anything and everything that moves. The controls are smooth, you climb and move behind cover like a panther, and the shooting is accurate. This is where you naturally slot in comparisons with Gears of War and Uncharted, but that's only true as far as the mechanics go, unfortunately the plot and setting disappoints.

At the centre of the story is a mercenary team of four called Overstrike 9, hired by the government to investigate an attack on a research facility. Apparently there is this new alien substance called Fuse that the bad guys want to get their hands on. Why you ask? Well, to conquer the world, naturally! As you may have expected, it will be up to you to save the world, not exactly the most innovative narrative ever seen, but there's a job to be done and someone has to do it.

You'll forget the names of the characters as soon as you shut down. The enemies on the other hand seem to be have been unearthed from the video game designer's cemetery. A number of different human outfits, explosive little spider robots and rampaging mech robots that seem somewhat out of place in this cover-based shooter. Was this really what Insomniac had planned?

The first two levels of the game are set in generic and boring industrial plants, but after a while you'll get to see a bit more varied environments. Enemies repeat like a broken record, and the boss fights don't really help. There is exactly one really interesting boss fight, but most of them just feel bland and uninspired.

The saving grace here is the abilities of the characters. Each character is able to handle standard weapons, but each of the four heroes also has access to one unique Fuse-powered weapon. These offer different abilities that allow for specialisation. The team is made up of an increasingly potent damage dealing sniper, a tank with an energy shield, a crowd controller, and a healer.

These special weapons, when combined, manage to elevate the level of entertainment in spite of a boring plot and the endless repetition of the enemies. There is also a bit of character progression to manage, but don't expect anything close to Borderlands. Each character has one tree to progress through, and while they are fairly similar, they're focused on their own unique skill.

The interesting team mechanics are what saves the game. It's been designed with 2-4 player co-op in mind, and the single player is not in for a good time. In the beginning of the game you will be able to advance using any of the characters, but towards the latter part your only viable option is to use a ranged approach. The artificial intelligence of your squad mates simply doesn't measure up, and it becomes very tedious. Add to this the fact that the game spans across 7 hours and you'll realise that singleplayer isn't how Fuse is meant to be played.

However, if you can play the game in splitscreen on your sofa or online, then things pick up. In addition to the campaign there is the (almost mandatory) inclusion of a wave-based Horde-like co-op mode, in this case called Echelon. Twelve waves with randomised mini-missions that includes protecting certain objects, killing an enemy leader within a set time limit, or simply surviving for a certain period of time. The difficulty is set very high, but if you band together with some good friends you're going to get a few hours of enjoyment out of it.

This is not what we're used to seeing from Insomniac Games. Somewhere in production hell this game strayed from what could have been a fun diversion, to become a generic and unimaginative mess. What saves the game at the end of the day are the mechanics and the co-op, and it is a sad revelation that the Fuse-powered weapons have more personality than the main characters. If you've got a bunch of friends who enjoy playing co-op, then Fuse is worth a shot, but there are better alternatives available in the genre.

"If you've got a bunch of friends who enjoy playing co-op, then Fuse is worth a shot, but there are better alternatives available in the genre."

Insomniac's co-op shooter to arrive in May.

Crazy weaponry, aliens, and a colourful universe. Insomniac bring some familiar elements to their multi-format debut.

Talking co-op with the game's director. 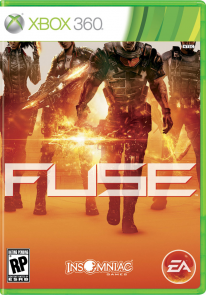