To be an old classic strategy series has to be one of the most degrading situation you can be in as a game right now. You might have been a huge hit once upon a time, but now you're as relevant as an American Idol-winner from 2009. And when it's time to be brought back from the dead, you always get the same treatment. "Hey, Shadowrun! We heard you were a popular tactical roleplaying game once upon a time, and the fans have wanted a sequel for ages, let's make a team-based Counter Strike-clone with magic!" "X-Com is back! Now as a first person shooter!" Yeah, you get the point.

So I wasn't really surprised when I heard about Front Mission Evolved. "Evolved" in this case means that they've taken out everything that made the game a fan-favorite, especially in Japan, and just kept the story. Instead of tactical battles with giant robots it's all about typical third person action with giant robots. Guess which usually sells best? The latter, of course. But which genre is also saturated with mediocre games that won't stand a chance to sell in the first place? The latter there too.

And sadly, Front Mission Evolved is rather mediocre, even if it's a good try from developer Double Helix that a while ago gave us the disastrous G.I. Joe: The Rise of Cobra. Early on in the game it's terribly slow, as you stomp around in fifteen meters of robotic steel on the streets of New York and shoot at equally slow tanks or other robots. But fairly soon you get new options and the standard robot, which looks like your standard anime robot, can be modified in whatever way you feel like.

Heavier weapons, faster legs, better energy reloading or perhaps some stylish cameo-color for your shoulderpads? Something that every Armored Core-game have done during the last 13 years, so pimping your robot is hardly a selling point. But I do like the option to specialize myself in my favorite weapon and it's always cool when a giant robot walks around with a huge shield.

A welcome surprise, that turned out to be a lot more fun than I thought, was when protagonist Dylan Ramsey is forced to leave the safe cockpit of his wanzer (short for Wanderpanzer, a walking tank in typical Japanese German) and gets to run around on his own. Then the game turns into a traditional third person shooter, complete with cover behind strategically placed boxes and grenades to lob against hordes of enemies, but it actually works. Is a nice distraction from bashing up other robots, a bit like Xenogears or Lost Planet.

But it doesn't really get better than that. The story is stereotypical, but I have to give the developers some cred for not turning Dylan into a whining teenager and that he is not voiced by Nolan North. According to all classic anime rules the villains are twice as colorful and interesting than the hero and I dig both the Sun Tzu-quoting Brit and the cocky gang leader that doesn't care about anything except money. I also like how the game's world is still firmly based in modern times, even though it takes place several hundred years in the future. We got buildings that were built hundreds of years ago today, so why would a future humanity tear down everything and start fresh?

Even though I don't really care that much about the Front Mission-universe I can't shake the feeling that this would have been twice as interesting in another genre. With the obvious budget limitations it might have been a good idea to go for a less resource demanding genre, especially one not filled with huge games with just as huge advertising campaigns. As an attempt to make the series relevant here in the West, Front Mission Evolved is a complete waste of time. Unless you're a total robot fanatic that's tired of the Armored Core-games you won't miss out on anything if you skip this one.

Gamereactor UK
+
Nice design
-
Bad controls, repetetive
is our network score. What's yours? The network score is the average of every country's score

REVIEW. Written by Mikael Sundberg (Gamereactor Sweden) on the 22nd of October 2010 at 13

A Western developer gets to remake a classic Japanese game series, this time in a completely new genre. Mikael has made New York a bit less safe in his giant robot...

Have some big robots this Monday!

Giant mechs that blow stuff up! 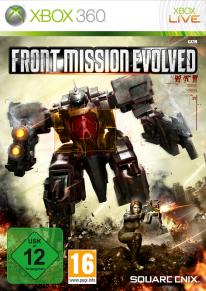