There are a few franchises that have defined the horror genre throughout the years. We have A Nightmare on Elm Street, Evil Dead, Halloween, Scream, and then we have Friday the 13th; the phenomenon that made your parents want to ban horror movies from your childhood home. We remember when we first asked permission to watch whatever horror flick was popular at the time, and our parents giving us the answer "absolutely not" in unison, referencing the horror and the inability to sleep at night left in their minds since watching the original Friday the 13th back in 1980. Jason Voorhees had left them scarred for life, making that happen with nothing but a melee weapon, brute strength, and the memory of him drowning on the campgrounds as a child.

Illfonic wanted to expand the media phenomenon surrounding Jason Voorhees and released co-operative horror game Friday the 13th: The Game in 2017, where players would either face Jason as one of up to seven camp counselors, or go up against those same counselors as Jason himself, offering a different experience than the single-player horror games we'd seen before (and something similar to Dead by Daylight).

We've got our hands on the Switch version of this horror game, and we very much prefer this experience playing Friday The 13th: The Game. While the game isn't perfect by any means, the Switch version is a great port and the essence of the game and what made it fun shines bright amidst the darkness of Crystal Lake on Nintendo's hybrid console, especially in handheld mode. We also have to give kudos to Illfonic and Gun Media for blessing (or cursing, we're not sure how to word this) the Switch with more adult content, because the ones of us who passed the age of 18 long ago welcome these titles with open arms, as we did with the likes of Doom and Wolfenstein.

As Jason, your mission is to slice, bash, or crush as many of the counselors as you possibly can, which gets easier as time goes on. Jason has various tricks up his sleeve too (he's the underdog here, right? There are seven of those pesky counselors!). He can run, smash doors to smithereens, move at alarming speeds underwater, throw knives, and set traps for his unsuspecting victims. Apart from these neat gadgets and abilities, Jason also has "powers", if you will. These are used by pressing the assigned button on your controller and have set timers for when they can be used. With these powers in place, Jason can teleport around the map, sense his surroundings (which basically means he can see important structures and players through walls and terrain for a moment), 'shift' through terrain to get to victims quicker, go into rage (which boosts Jason's overall stats, making him deadlier and more silent to the counsellors), and stalk his victims, making his location harder to pin down.

As a counselor, however, you don't have any fancy powers at your disposal, instead you're relying only on gadgets and your fear-induced survival instincts, not to mention the power in numbers. Each of these has different stats and represents different horror tropes, and your mission is to escape the area and get out of harm's (Jason's) way, hide until the timer runs out, call the cops, or kill Jason by using any means necessary. You do this by trying to stay as quiet as possible and collecting items as you move through the maps, from items to help you and your team to escape to weapons to stun Jason and healing items.

Escaping death isn't as straightforward as it may seem, and you'll need to complete various objectives or hide to reach the point of victory. Both sides have interesting mechanics, and while we prefer playing as Jason for the simple reason of him being Jason Voorhees, the potential teamwork at play when being a counselor really does elevate the game and the whole idea. Who you get to play as isn't set in stone from the start either, so get ready to play whichever part the game sets you as.

When you level up - which you do by killing your enemies or surviving the night - you'll earn some experience (or customisation) points you can use to unlock executions, which are new and neat ways to kill the poor counselors in your path. You can also unlock perks for Jason or his very much alive in-game counterparts.

Now, this review isn't just about the game itself, as Friday the 13th: The Game has been out for quite some time now. The Switch version, however, is wonderfully fresh, and we have to say the Switch version is the best version we've tried so far (having played it on Xbox One prior to testing it out on Nintendo's hybrid console). Sure, the game feels somewhat "heavy" to play, as movements feel stiff and the models within the game look odd at times, but Friday the 13th: The Game runs really smoothly on the Switch and we adored how it looked in handheld mode. The small screen of the Switch in handheld mode masks the minor issues of most games, but in F13 it really makes a difference.

The gameplay feels good for the most part too, as we never had issues with the controls and we never thought playing a cooperative horror game on the go would be something we'd enjoy until now. From what we've experienced, getting in a game isn't a problem on the Switch and even if you do find yourself in a network pickle, the "vs AI" mode is really satisfying as well (we killed plenty of puny AI counsellors at Camp Crystal Lake, trust us). Apart from this, it's worthy to note that the Switch version comes with all released DLC, so even if you've tried the game on other formats in the past but have yet to put your counsellors in a bikini as they get chased by the killer roaming around with his fancy DLC execution knowledge, there are a few neat surprises in store for you as well.

Advertisements
Gamereactor UK
+
Looks great in handheld, Mechanics are still fun, Runs well, Offers great co-op opportunities
-
Feels stiff, Can get repetitive, No set-in-stone choice of what part to play
is our network score. What's yours? The network score is the average of every country's score

We play Friday the 13th: The Game today on GR Live

Jason is back to haunt Nintendo's hybrid console and we're facing him on today's livestream.

Friday the 13th: The Game welcomes you to the Salt Mines

Gun Media has found a new way to deal with poor sports.

Friday the 13th: The Game gets single-player update

In addition to holiday events for increased perk rolls and double XP.

Friday the 13th: The Game single player has no story

Instead there will just be challenges, Hitman-style.

Jason's "hockey mask is as recognizable as Mickey Mouse."

Victor Miller wants his rights for the film series. 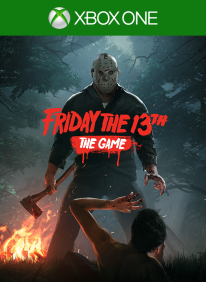