The 50s: colourful fashion, curvy cars and voluminous haircuts as far as the eye can see. It's an exciting time for people - a time before you were aware of the hazards of smoking - and for the first time it didn't feel like the big ball of cheese in the sky was out of reach. Everyone wonders what awaits us up there in space. Is it perhaps sinister space dudes, purple slime lumps, or even colossal ants? All three are popular guesses, but nobody knows for sure. Then, suddenly, the night sky split in two by a green laser beam. Police shoot blindly into the air. Pedestrians shout themselves hoarse on street corners. They are here. The Martians have come, and they brought with them their damned robot army.

We, along with our three colleagues, are the only thing standing in their way - literally. This is Fortified, a downloadable tower defence game from Clapfoot that's out now on Xbox One and PC.

The first thing you will notice when you start up the game is how the developers have been inspired by the cartoon style from the golden age of comic books. It's really charming and well executed. Enemy design is also taken from the cheesy sci-fi movies shown at cinemas during the same period. Green Spiders from Mars, floating metal balls, tincan-like robots and UFO ships beam down to the city streets. All of them are committed to destroying the space rocket that is always waiting on the other side of the road.

This is where our special team comes into the picture. An astronaut, a rocket scientist, a secret agent and their charming captain are all playable heroes in Fortified. You're free to choose who you want to play as, but if you don't want play by yourself you can always collaborate with friends (or strangers) online. The task at hand is very simple and stays true to the genre: defend the rocket on your side of the road, protecting it from the alien threat. This is a mission that is repeated again and again in twelve rather small and similar levels. After all, it's tower defence we're talking about here. Consolidate your base, fix up and defend all the possible routes, and keep away waves of enemies until it's over. If you already know that this is not something for you then maybe it's best that you stop reading now.

But for those of you who actually like tower defence, we can happily announce that Fortified is a viable addition to the genre, and it comes in at a low price too. The cheap price tag is matched, however, by the budget production values and a disappointing amount of content. The levels are too few and too short, enemies quickly become monotonous, and the music is very anonymous. What speaks for Fortified instead is the core game. It's simply great fun to kill Martians with friends.

Robots crackle and explode when filled with lead, spiders bleed green blood, and even the most extreme violence in the game is colourful and comical to watch. The characters are unique with their very own weapons and abilities, making it fun to find your favourite and assign upgrade points where you want them. Once you've killed enough enemies, each character can turn on a special attack. The captain, to mention one example, becomes an immortal stereotypical action hero (infinite ammo included). The best one (in our humble opinion) is the rocket scientist, who gains the ability to fly up into the air so that you can make it rain grenades at your enemies from above.

If you feel too powerful, feel free to raise the challenge. Clapfoot has done a good job of developing the different difficulty settings, so it's suited to different players (and it also scales according to the number of players on the level). If you play on Normal you can successfully get through the game on your own without bothering too much about the placement of turrets and traps, while those who really want to get involved in the war against the Martians can unlock the Insane mode where cooperation and tactical thinking is essential.

So what is waiting on humanity out there in dark recesses of space? As it turns out a charming and relaxed gaming experience, although one that is perhaps a bit too shallow for its own good. If you find some people to share this experience with then it will keep you occupied for a few evenings, but once your company grows weary there's not much else there. Perfect if you're looking for a quick fix of tower defence for a cheap price if nothing else. And remember, the Earth is counting on you.

Gamereactor UK
+
+ Quirky visuals and art, decent mechanics, fun co-op.
-
- Shallow with some repetitive gameplay, budget production values.
is our network score. What's yours? The network score is the average of every country's score

REVIEW. Written by Mathias Holmberg on the 15th of February 2016 at 13

"A charming and relaxed game, although one that is perhaps a bit too shallow for its own good."

Fortified out now on PC and Xbox One 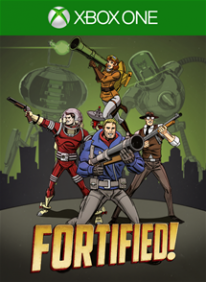