It's been a while since we heard something from Formula Fusion, a spiritual Wipeout successor from a team called R8 Games in Northern England, that was released in Early Access on Steam a couple of years ago. Turns out, there's been a lot of things going on and the game is now rebranded Pacer and is coming to PC, PS4, and Xbox One. The idea is that it's an evolution of the Formula Fusion concept. Offering 4K resolution at 60 frames per second, this antigrav racer looks to have all the things we expect including a futuristic soundtrack that includes tracks from CoLD SToRAGE (of Wipeout fame).

"This change in gear really does mark the next stage in Pacer's progress," says Steve Iles, senior producer, via press release. "The game has changed significantly with a ground up re-coding of the core gameplay systems and inclusion of a wealth of new content. We've got some big plans for 2019 and we felt that we needed to reflect that with a name that more accurately captured the spirit of the game. For gamers who have been on board ever since we first announced the original game in 2015, this evolution is representative of our ambition to deliver more of what they love. Pacer is the realisation of our original vision, but bigger and bolder."

It's not just the name that's changed, but Pacer will offer plenty of new features and modes including, you guessed it, a Battle Royale called Storm Mode. There are 14 tracks to conquer and 5 customisable crafts to pilot, and crafting weapons and cosmetics is a big part of the package. Pacer makes use of the Unreal Engine, and is playable at EGX Rezzed this week, where we'll take a closer look at what it offers.

Pacer lets you create "your style of play, your way to race"

The anti-grav racer formerly known as Formula Fusion offers high-speed action, lots of customisation, and it's coming this summer.

Antigrav racer to feature 4K graphics at 60fps with a great Wipeout heritage in the shape of devs and music. 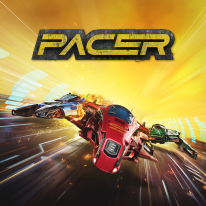