You'd be forgiven for having missed talk of ThroughLine Games' Forgotton Anne up until now (and yes that's the right spelling by the way), as until we received the review code weeks ago we had, excuse the pun, forgotten about it too. Having been officially announced all the way back in 2016, it may have gone under a lot of people's radars since then, but we're here to say that this is a game that should definitely be in your thinking, because it's one of the most interesting games that we've played so far this year.

Let's weave you a picture. Imagine a world where all the material positions you lose or throw away - forget about, importantly - get transported to a world where they take life and live in their own society via a mysterious substance called anima, all of which is overseen by a human called Master Bonku, who helped create this world.

In this strange world populated almost entirely by objects with life instilled into them, you play the role of Anne, also known as The Enforcer, since she helps Bonku oversee the land and enact justice where it's needed. She's also a human, one of only two in the realm, and the game opens with you hearing reports of rebel Forgotlings (as the objects are known) destroying property to try and disrupt Bonku's bridge to the real world, which he promises will restore all these objects to their owners again and give them purpose once more.

At the opening of the game we jump immediately into Anne's shoes, waking up in her quarters of the tower that overlooks the land, and when we say tower, we really mean a heavily-guarded fortress. Also in the tower is Bonku, and as we wake up we start to explore the world, presented to us like a classic 2D Metroidvania, with a slower pace and an unfolding world that gradually gives you more and more to see and do. Also, the colours are more subdued than other platformers, again like a Metroidvania.

The basic controls involve running and jumping, but there's also an added tool in the form of the arca device that's attached to your wrist. This is a device capable of both giving and receiving anima, with the capacity to hold one unit of it at any one time, meaning that you can't stockpile it for use whenever you want. To transfer anima (which also powers machinery in this industrial world full of factories) from one device, for instance, you'll need to take it from elsewhere, and what's more is you can also take anima from Forgotlings to either reanimate or 'distill' them - the latter of which effectively kills them.

What's impressive is that the world you explore is not only seamless, with almost no loading screens, but also watertight in the sense that there's only ever one way to go to advance, but at the same time it doesn't feel restricted. Progression feels natural and there are subtle guides to tell you where to go, not to mention environmental features like lights that empty your arca, forcing you to confront new areas in the world fresh.

On the topic of these puzzles, none of them took us ages to complete, but they provided enough variety to keep the pacing gentle while stopping us from rushing ahead. Considering they revolved around powering machinery or fixing parts damaged by rebels, they all felt natural instead of being there for the sake of it; they didn't feel like puzzles in a video game, but instead environmental challenges as a result of events in the world.

It's a touch surprising that there's no combat nor death in Forgotton Anne, but that's the beauty of it as well because a painstaking effort has been made to ensure the world around you and the adventure set within it never stops flowing. You don't get loading screens or Game Over screens, instead get to unfold the world with the wings on your back (that Bonku created for you when you were just a child), letting you take great leaps over buildings and reach previously inaccessible places. You're always moving from one place to the next, and you never get bored.

What's most likely the first thing people will notice about this game though is the visual style, which is reminiscent of Studio Ghibli marvels like Spirited Away, especially when it comes to Anne's own appearance. It's no secret the developer was inspired by the Japanese animation studio, and this is pervasive throughout Forgotton Anne. It's not quite at the same level of pristine polish, as there a slight roughness around the edges especially when it comes to the Forgotlings, but make no mistake: this game is nothing short of beautiful.

That's in no small part due to the environments and backdrops, some of which you can even walk into as you can move away or towards the camera in certain sections. The world as a whole is bleak and absent of colour, save for a few sections we won't spoil, but that doesn't mean it's any less wonderful to look at, as the looming buildings and ominous heights make you feel tiny in comparison. What's more is that the game's style visually evolves as you progress, producing some stunning set pieces that really blew us away.

This style extends to the range of actors in the game, who were consciously chosen with different accents to reflect the diversity of Forgotlings in the world, mimicking a real city. We're introduced to gritty American in the form of Magnum, for example (a gruff handgun who maintains the law with firm strictness), as well as frightfully British, Brummie, Australian, and countless more voices on our journey, all of which create an immersive tapestry which we have to work our way through. An adventure with a memorable cast is one of the most special, after all, and there are too many great characters here to name them all.

Tapestry is the right word here too, since the entire experience from start to finish plays like a painting, with no visual knock between cutscenes and gameplay. Animations are smooth, everything looks stylised, and the artistic vision is consistent throughout, meaning it doesn't feel like your typical video game. Even the bits you can interact with aren't always highlighted, instead, they're obvious from your own experience rather than being circled with a metaphorical marker.

The crux of the ever-vague word 'charm' about Forgotton Anne is in the characters and the world it presents, as all these Forgotlings are very real and relatable in their portrayals, struggling in a world where they're both worried about being forgotten and struggling with the idea that they're only built for one purpose. Much like the Ghibli projects that have seized the hearts of many, the story is a heartwarming tale that's wrapped up in an incredibly pretty package.

What's more is that there are powerful choices at play here that revolve around morality; whether the 'objects' you're pursuing are really objects at all, and whether they should be given their own rights or not, given how they have life instilled within them. Choices you make will impact on how the story unfolds, and while this isn't new, this approach to inanimate objects and how you treat them is fresh and interesting, kind of like a fairytale where you have to realise something that was in front of you all along. Like with most fairytales, this has a message, a lesson for players of all ages, so this is one you can easily play with a loved one or with a child beside you.

Forgotton Anne is one of the standout experiences of the year so far and for good reason. ThroughLine's charming adventure combines a gripping story with interesting moral dilemmas in a consistently flowing story that's not dissimilar to working your way through a painting, one that sucks you in and won't let you go. There's very little that Forgotton Anne does wrong, since it's polished in every nook and cranny, so if you're a fan of Studio Ghibli, or just great stories in general, then this is undoubtedly one to check out.

Gamereactor UK
+
Stunning visuals in a Studio Ghibli style, Moral dilemmas, Unique story, Simple but effective platforming, Surprising story, Colourful and diverse cast.
-
Some bits like Forgotlings are a little rough around the edges.
is our network score. What's yours? The network score is the average of every country's score

"If you're a fan of Studio Ghibli, or just great stories in general, then this is undoubtedly one to check out."

Forgotton Anne coming to Switch in 2019

Japanese release planned, and we're expecting it to land here too.

Forgotton Anne is out now

And we have a special guest.

Distant memories: ThroughLine on the making of Forgotton Anne

We take a deep dive into the development of Forgotton Anne with members of development team. 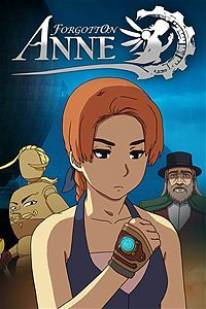