We've been playing manager games since the '90s, before Sports Interactive's games were called Football Manager even, and so it's with great anticipation that we await each new iteration. We couldn't possibly count the hours we've spent playing these games (remember, we started way before Steam was keeping track of these things for us), and so the question we asked ourselves when it was time to dive into Football Manager 2019 was a given: is it an improvement on last year's game?

This year we chose to try and shepherd League Two hopefuls Forest Green Rovers FC to glory. We tend to play the game in this manner, opting out of managing successful clubs as we enjoy the challenge of taking a club up through the leagues (although in order to give a fair review of the entire game we also played as a far better team on a separate save). First thing's first, however, as you have to try and create a manager who looks fairly similar to yourself.

Last year you could create one based on a photo, with fairly decent results. This year the result was not nearly as good, and we ended up tweaking a computer-generated character instead. There are options here, but it's not exactly as deep as character creation tends to be in major RPGs. It's not a key feature, but we're hoping it will be improved for next year. After all, your manager will stand there on the sidelines match after match.

Right as you kick off your career you're introduced to the two major improvements in this year's version, the tactical and training modules. Both are far deeper now than what was previously the case. You can choose between 11 different tactical styles, from the likes of tiki-taka (as made famous by Barca) which is focused on short passing and intense pressure, to parking the bus and keeping a clean sheet and neglecting possession. There is also a graphical representation of how this style is meant to look during a game, the game then suggests formations that fit with your chosen philosophy.

Training now borders on the extreme. If you enjoy handling every minor detail of the day-to-day running of the club you will spend hours here. It's incredibly detailed. You have the option of choosing exactly what the team should do during each session. Are you letting in too many goals? Then maybe you need to spend your first session defending against long balls, followed by a session where you focus on defending aggressively. You can also set individual training, create your own schedules, pick what coach handles what, and keep track of which players have excelled (or performed poorly) during the latest sessions. We're very impressed by the new training module and it has made things far easier to keep an overview than we've seen before.

We realise this may seem intimidating for new players. The game is crammed full of details, information, stats, and features and it can feel overwhelming at times. Here's the good news. If you want to simply focus on buying players and selecting your team ahead of the next game you can. You can leave it to your assistant manager to handle training, contract negotiations, and tactics ahead of the next match. You can choose to do exactly what you want and want you don't want to do. But no matter what, make sure you let someone else handle the press conferences. It is our opinion that this is the worst part of the game. It was introduced a number of years back, and it's just as dull now as it was back then. You're asked questions by journalists at different times, mostly after a match, and the questions are nearly identical and repeat over and over. Have you bought a new player? Then you'll know what questions you'll be asked, in which order, and what to answer. Thankfully you can opt out of it, and while it's probably realistic (what manager enjoys a press conference?) it's still painful to endure.

It's not a secret that this game will consume your spare time. There's so much to do, so many players to scout, so many staff to hire and fire. It will be several hours before you've made it past the pre-season. If you want a more streamlined experience there's Football Manager Touch 2019. It's a basic version of the main game. In a way, it's an updated version of the sort of experience you'd find in a manager game maybe 5 or 10 years ago. It's not something we've spent time on for this review, but it's bundled with the main game.

Sports Interactive strives to come as close to the real world as possible. Events may come to pass that will alter, more or less dramatically, the future. One such example is that the 2022 World Cup gets moved from Qatar to another country (in our case Australia) as a result of pressure and the various limitations that Brexit means for British clubs. Another new feature is the inclusion of VAR (the video refs that came into focus at this summer's World Cup) and goal-line technology.

Naturally, there are also things that come to pass that would never happen in the real world. One of the first players we signed for Forest Green was Antonio Cassano (who actually decided to retire not long ago). This is a player with 39 caps for Italy to his name and who has played for teams such as Roma, AC Milan, Inter, and Real Madrid. Now he plays at The New Lawn in Nailsworth, a small village with 5,700 inhabitants. To make matters worse we lost the first game at home to MK Dons... 0-10. Sure it's League Two, but still...

Let's take a look at the animations during the matches while we're on the subject of realism. They are without a doubt the best in the series so far. The players move well and the keepers dive after the ball as they would. That's not to say it's all perfect; there are still annoyances, like when a player seems to have forgotten how to play and just stands around when the ball comes to him, turning the ball over. Or when the keeper lets in a shot that comes straight at him. It happens very rarely (as it does in real life), but it is still annoying when it does.

The third major addition is that the German Bundesliga is fully licensed. This means that all the teams have the correct names and emblems and that the jerseys look the way they should. A minor detail for some perhaps, but a step in the right direction. Unfortunately, there are still many leagues that lack correct emblems and jersey colours. Thankfully these can be downloaded and added into the game manually.

You still feel like a tactical genius when you succeed and you're upset with the defence for letting in goals that are far too soft. The game does a great job of giving you that sense of responsibility. You get upset with players you wanted to sign but who opted to go to another team, and you'll be over the moon when you manage to clinch a 1-0 win away from home against the best team in the league even if you barely had the ball.

It's the best game ever in the Football Manager series, so what we're about to write now may sound a bit strange. If you own last year's iteration, there's little reason to buy this game as there's simply not enough major changes here. More new features and innovations are needed next year, but this is still a truly great management game. If you'd skipped Football Manager 2018 for some reason and wonder whether this might be the time to jump back in, then the answer is a resounding yes. Football management doesn't get better than this, at least not in the virtual realm. You can count on the fact that hundreds of hours will fly by.

Gamereactor UK
+
The new training module is fantastic, Match animations are good for the most part, Paradise for those who love numbers, Lots and lots of features.
-
Not enough new elements, Horrible press conferences.
is our network score. What's yours? The network score is the average of every country's score 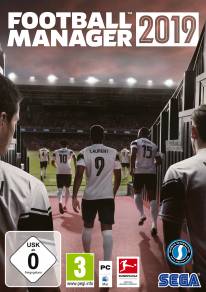