"In the most unfortunate of circumstances", publisher Deck13 and developer Parallel Circles have now confirmed the delay of Flat Heroes on PC and Nintendo Switch. The game has no new date other than dev and publisher stating "just a little bit later this summer". They add that we "can rest assured that the slight delay will bring some extra polish and even more refined gameplay". Originally the game was slated for a release tomorrow (July 5). 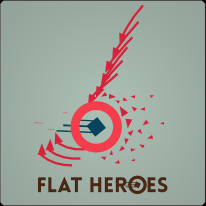