Ratchet wasn't the only platforming mascot that got the spotlight during last night's Gamescom opening ceremony, as we also heard news about our old friend Crash too. He may have got stuck alone in Cologne, but that didn't stop us from receiving news about new flashback tape stages that will feature in Crash Bandicoot 4: It's About Time.

These flashback tape levels looked very similar to the bonus stages from the original trilogy, but with an added ounce of challenge. To access them, you need to collect flashback tapes in the levels you'll visit, which sounds a lot like the approach Crash 1 had to its bonus levels. Toys for Bob did state that you'll need to obtain these collectibles without dying to be able to access the levels - a touch very similar to the death routes in the original games.

You can see footage of the flashback tapes in the video attached, at the 64:40 mark. 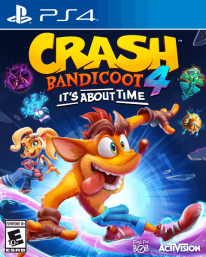