When Square Enix released Final Fantasy XIV, we had our doubts about the MMO, but after having spent countless hours with the Warrior of Light in the deserts of Thanalan, the forest kingdom of Gridania, and the snowy peaks of Ishgard, Final Fantasy XIV has provided us with some memorable experiences. It has grown as a game since its initial release, and now its second major expansion, Stormblood, has arrived, something that we can happily say is no different in terms of quality.

Stormblood begins shortly after the events in Heavensward and the characters from your previous journey are back, including the always reliable Cid, Alisaie, and Lyse. One big change here, however, is that this time around Lyse has been given the spotlight, since Stormblood takes place in her native homeland.

Besides the recurring characters, the main events in Stormblood are centred around the liberation of Ala Mhigo, in the vicinity of Gyr Abania. The plot doesn't waste any time before throwing you directly into the action and it's not long until you are caught in the midst of a civil war and have to become a champion of the resistance.

This new narrative adheres to the already established fundamentals of storytelling in Final Fantasy XIV, as it's generally more nuanced than other titles in the same genre and includes long cinematics and occasionally masterful voice-acting. You won't find many "go kill five creatures and bring me their horns" missions, for example.

However, one ought not to expect a narrative at the same level as a single-player Final Fantasy game (besides the horrendous Final Fantasy XIII-trilogy), although it still manages to tell a fine tale with interesting characters and events. It's a welcome trend since Stormblood continues the idea of making MMORPGs as much about the individual players as it is about the online agenda.

At the beginning the new areas might feel a bit barren and abandoned, but this is far from the truth. The Peaks, for example, aren't exactly a treat for the eyes, but as you venture on and explore more of the various locations, the details found in the new areas shine beautifully. And speaking of beauty, the game is nothing short of gorgeous, and once again solidifies Final Fantasy XIV's place among the most jaw-dropping worlds to visit. Every detail, from the autumnal trees, the aftermath of battles, and beams of sunlight shining through the landscape are incredibly well done. During battles with the new classes Samurai and Red Mage, their different spells and abilities are a joy to watch too, especially as the Red Mage lights up the screen.

On the subject of the new classes, Samurai and Red Mages handle very well, even though we preferred the cunning approach of the Samurai over the magic-heavy style of the Red Mages. To deliver staggering amounts of damage, the Samurai can string together a number of different move combinations, which result in powerful finishing blows. The Red Mage, on the other hand, is a mix of black and white magic combined with different swordplay abilities. Using either a black or white magic spell will then, in turn, make the next spell cooldown free and you can then dualcast, for example, fire and thunder or aero and ice. The spectacular magic effects might make the mage seem overpowered, yet it's well balanced.

Stormblood unfortunately still suffers from the same flaws as the previous entries. Too much grinding in between chapters and a horrible UI still plague the core experience, and the on and off voice-acting in cutscenes also make a return, making them inconsistent at times.
These are minor issues which don't prove ruinous to the experience, but it's a shame we still see them after two expansions.

The story of Final Fantasy XIV's success is a long one, and Stormblood is a testament to how far the game has come. So many elements work excellently and the visuals are among the best in the business. It's a game which understands the legacy of the franchise without trying to mimic it completely and, in the end, the game helps Final Fantasy XV in mending Final Fantasy's reputation after games like All the Bravest, Final Fantasy XIII, and the original Final Fantasy MMORPG. With that in mind, we can't wait to see what the future holds for the franchise.

Advertisements
Gamereactor UK
+
Fun new classes, excellent story, bold world design.
-
Annoying UI, repeats the same mistakes of the base game.
is our network score. What's yours? The network score is the average of every country's score

"So many elements work excellently, and the visuals are among the best in the business."

Patch 4. 3 brings new content, and there's a companion app also coming in May.

Final Fantasy XIV returns to Ivalice with these screenshots

Online
mmofanatic Edited by moderator on the 12th of March 2021 at 07:56.
I started playing recently red mag. I'm having a great game. All thanks to this guide. 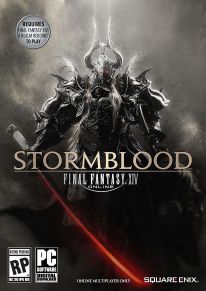