At the tail end of the PS2 era, Square Enix released Final Fantasy XII, a game that pushed what was technically possible on the console at the time, and even with the release of the PS3 just a few months later, sales of the game didn't dwindle. FFXII is still in the all-time top 10 best-sellers on PS2, sitting just behind Final Fantasy X, and with last year's FFXV introducing many new players to the majestic worlds of Final Fantasy, which gems from the past might newcomers to the series have missed out on?

FFX and its sequel have already been re-released and the complete rebuild of the legendary FFVII is not far off now (fingers crossed), meaning modern players can now experience some of the series' standout episodes, and Final Fantasy XII is certainly one of them. The game's reception back in 2006 (early 2007 for the EU and US) wasn't without controversy, but then again what Final Fantasy game hasn't had that? Many complained about the combat system moving from turn-based to an active battle setup, and a complex license checkerboard rather than a skill tree left some players feeling that the game had strayed too far from traditional RPGs into MMO territory.

To rub salt into this wound, only a year after the game was initially released, Japan received an updated version called International Zodiac Job System, which boosted the amount of licence boards to a whopping twelve, one for each sign of the zodiac. The ability to control guest characters, a 2x time boost while pressing L1, and a Trial mode which consists of 100 boss fights to help earn your characters extra items were all added to the game, although the West never received this updated version. All of these updates are now present in the new Final Fantasy XII: The Zodiac Age, and they're certainly welcome.

Our story takes place in Ivalice, a world of magic and airships, where the earth is rich in Magicite, an ore imbued with magic that is used to power vehicles and grant users the ability to cast spells. Torn apart by the war between the Archadian and Rozarrian Empires, the smaller countries in Ivalice struggle to survive. Caught in the middle of this war is Dalmasca, a small sovereign state where our hero resides. Vaan is an orphaned street urchin who dreams of being a daring sky pirate. Teaming up with his best friend Penelo, who has also lost her parents to the war, they meet a loveable rogue of a sky pirate called Balthier, who sees himself as the leading man, and who is accompanied by Fran, a Veira, a race of tall, rabbit-like humanoids sensitive to the Mist (Magic). There's also Basch, a fallen knight of the Dalmasca army. This unlikely partnership embarks on a quest to rescue Princess Ashe and with her help restore sovereignty to Dalmasca.

It's worth noting that the story does have some parallels to Star Wars, but in no way is it a copying it; it's more a testament to how great classic storytelling is, and as we know Star Wars took inspiration from Akira Kurosawa's Hidden Fortress. We don't want to spoil any of the fantastic narrative, as it will keep you intrigued and entertained for the many hours of play, so let's move on to movement and battle.

Ivalice is pretty much open-world, not so much like FFXV but more a huge collection of mini maps interlinked with passages that help make up larger maps. Dotted around these are blue save crystals that you can not only save your progress with, but that also replenish your health and magic. Moving from map to map does require a small load time but, thankfully, these have been greatly reduced from the PS2 days, down to just a couple of seconds in which the game also autosaves your progress. Movement over greater distances can be done via orange save crystals, however. These are less frequent than the blues, mainly one per region, and they require a teleport stone to use. When roaming the areas on foot all active members of the team are visible on screen and gone are the days of random encounters popping up when you least expect them.

You are able to see enemies in front of you which are also displayed on the mini-map radar, and it's up to you to enter the fray or skirt round the larger ones. Each enemy defeated will earn you some XP and a license point, and as mentioned the battle system is now real time, each character having their own style and can either use a physical attack, magick, technik or an item dependant on what has been unlocked on the licence boards. Trying to utilise these moves manually can be quite tricky, especially with up to four active characters on screen. As for balancing all your moves while in a battle, you can use the unique gambit system, a clever way of utilising a pre-set list of instructions.

If your party members are getting low on health, you can set a gambit to automatically use a potion when they hit 50% HP, and as you play the number of gambits and their uses can be tuned to your own style of play. The more enemies you defeat, the more licence points are earned, and the more skills you can unlock on the licence board. The board also affects your weapons and armour. Pick up a weapon you don't yet have a licence for and you'll not be able to equip it; simply earn enough points through fighting and purchase the required licence and then equip your weapon. As the game proceeds and you unlock more of the board, you'll notice the price of the licences rises, but don't worry too much. With a little bit of kill farming out in the wild with maybe a golden bangle (doubles the LP earned) equipped, you'll soon earn plenty of points to purchase anything you need. To add to the 2X speed increase that the zodiac job system introduced, Zodiac Age also has a 4X boost which, if used with the gambit system, can take and grind out of farming XP and licence points.

In addition to the basic attack, magicks, technicks, and items, characters can also unlock mist spells in the form of quickenings and summons, special actions that require charging to cast. Quickenings cause the battle to pause while the spell is being cast, and if other characters also have quickenings available it's possible to link these with a quick button press. Connecting just a few of these together can deal huge amounts of damage to bosses or hunt marks. Summons, on the other hand, replace all the active members in your group (other than the summoner) with an Esper, a large demon that will aid the caster in battle for a limited time or until defeated, certainly handy for getting through tough fights.

Playing through the story isn't the only thing to do in Ivalice though, as you can make your way to one of the local taverns and peruse the bounty boards for hunts to complete. You'll be able to join a hunting clan and earn rewards for taking down foes at the request of people in need as well but, annoyingly, after accepting a quest from the board you then have to find the person who has posted the notice. They, in turn, will then tell you where you need to go to find the beast and, once defeated, you must return to them to claim your bounty. Thankfully your progress is kept in the clan primer in the menus making it easier to keep track of where to go and what to do. Some hunts are only available under certain conditions, though; one beast only appears when you have an all female party, and another can only be found when its raining heavily, which really add some variety to the hunts.

For a game that's ten years old, it still looks fantastic, but the again it was never a bad looking game to begin with. The opening full motion video and later major cutscenes show just how advanced the Final Fantasy series has been in terms of pushing visuals. The whole game has been given the high definition brush up, the menus and text have all been sharpened, and in fact, the only small bugbear we had is that of the lip syncing; it's clear from the outset that the English voice acting, which while well done, has been dubbed over the original Japanese video and there has been no attempt made to sync the words with the movements, but this really is just a small issue as it only applies to the cut scenes.

The entire game's soundtrack has been beautifully reorchestrated as well, and each piece of music that fills the game with so much energy and majesty has been newly arranged by the original composer. And while you can switch between the original score and the new one at any point in the game, we found the reorchestrated music so pleasant to listen to we stuck with it for the entire game.

This remaster has been wonderfully done and finally the rest of the world can experience the extras that previously were only available to Japanese players. It's a huge game, even by today's standards, and it should keep you intrigued and entertained for many hours. Whether you're a fan or a first timer, Final Fantasy XII: The Zodiac Age is a game that deserved to be a Top 10 PS2 game, and it was certainly worthy of this fine remaster.

Advertisements
Gamereactor UK
+
A compelling story and cast, Unique battle style and skill system, Huge maps to explore, Complex and slightly daunting skill system
-
Lip Sync issues.
is our network score. What's yours? The network score is the average of every country's score

"This remaster has been wonderfully done, and the rest of the world can now finally experience the extras that previously were only available to Japanese players."

Final Fantasy XII for Switch / Xbox One has reversible covers

Those players who've had to wait for this game will also get extra in-game goodies like more Gambit sets, improved New Game+, and more.

Two packages are set to launch in a few months to reacquaint us with older titles in the franchise, both of which are considered classics.

ARTICLE. Written by Gamereactor Staff on the 11th of January 2018 at 17

We had some questions for producer Hiroaki Kato about FFXII's upcoming PC port.

One million copies sold and we're promised a surprise.

We have new artwork to celebrate.

Infinite Warfare places itself between the two games as well. 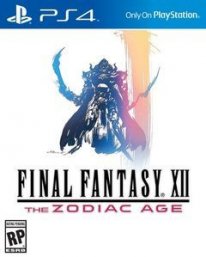