Final Fantasy VII: Remake Intergrade is about to release on the PlayStation 5. Square Enix wants to encourage fans to revisit Midgar (and to invite a bunch of newcomers now they're at it) with a new version of the game, which improves on pretty much every aspect of the original. Besides that, the enhanced title comes with a brand-new story in the form of Episode Intermission, with Yuffie as a protagonist. More than enough of a excuse to wield the Buster Sword again, don't you think?

Well, while this was meant to be a full review of everything new in the game, unfortunately we didn't get access to the story of the ninja from Wutai as of just yet, so you'll have to wait a bit longer for us to tell you more about that. What we have is a much more informed opinion about how Final Fantasy VII: Remake has changed in the leap from PS4 to PS5.

From PS4 to PS5: How noticeable is FFVII:R's enhancement in the new generation?

First and foremost, take this as a tutorial of sorts, as to begin with, for those who played the PlayStation 4 original already, you will have to transfer your save game. After a recent update, Square Enix has implemented a new tool allowing you to take your saved files to the cloud so that they'll be available to import to your empty slots on FFVII:R - Intergrade when you upgrade to PS5. This is a free update for those who bought the PS4 title, but not for the ones who downloaded it via PS Plus a couple of months back.

While this sounds good on paper, it's a nuisance in practice. There's no limit to the amount of games you can transfer, but you can only take one slot from PS4 to PS5 at a time. This means the transferring process will be as follows:

A pro tip? We recommend you transfer a full game save once you've completed the game, as after you seen the credits roll than you'll be able to choose a chapter freely.

Now, let's get back to the bigger point at hand: is there that much of a difference when you compare Intergrade on PS5 vs the original Final Fantasy VII: Remake on PS4?

Yes, there are a bunch of differences, loading times being the most obvious. They've been shortened drastically. What on PS5 now takes around 3-5 seconds, it took about 30-60 seconds on PS4 approximately. Those pieces of advice you found on the loading screens? No time to read them on Intergrade.

Another new feature on the new generation is the graphical quality settings. We've enjoyed ourselves playing on Performance mode all the time to see what it feels like to control Cloud and the rest at 60 frames per second. Even though there's a Quality mode, upping resolution to 4K and halving framerate, believe us when we tell you that you won't want to go back to 30 fps once you've tasted 60 fps. The extra smoothness suits the ARPG fantastically.

There are other additions in terms of lighting, amount of detail in objects and mostly the textures of characters, weapons, and environments. The infamous door to Cloud's apartment? No longer a blurry mess. The views on Midgar's slums on your way to the second reactor? Well it remains as a texture, but it's now much better, er, intergrated, with a nicer 3D effect to it.

Square Enix has also removed some static lighting in favour of a more natural finishing with additional sources of dynamic lighting. It's true that, in the process, some light beams, which previously added a cinematic touch are lost, but in return a number of added reflections now populate metallic and glass-based materials.

Now, a change which strengthens Midgar's atmosphere. The oppressive feeling of the place, with its mysterious, even ghostly style at the reactors' surroundings, due to Mako's flow, now sees itself accentuated with the new foggy effect and the added volumetric lights. We weren't convinced at first about these tweaks, but the end result is clearly better.

Finally, we'd say that there were certain sequences on PS4 that were pre-rendered in-engine to save some real-time resources and reduce stress whenever there were many elements on screen. On PS5's Intergrade you can clearly see that those sequences are being drawn on the fly, given that they adjust their framerate depending on the graphics settings of choice. A certain moment with a certain character from the past towards the final hour of the adventure made us realise this.

To enjoy the enhanced graphical flair, Intergrade introduces a new photo mode for you to play around with filters, zoom, angles, or exposition values, even though it's quite limited when it comes to move the camera.

...but it doesn't take full advantage of the new hardware

What we're missing is a better use for the DualSense. There's no haptic feedback on the controller, no tension on the triggers, bar a few occasions. We've felt it, during the motorbike sections at the game's beginning and ending. In those, L2 and R2 triggers show some resistance and the controller responds differently, but it's far from what we've seen with other PS5 games. It's a shame as we'd love to feel it in our hands, and we'll see whether Episode Intermission shows a better implementation.

Then we know there's some additional content here and there, some extra combats, but we weren't able to find them during our playtime so far. We'll keep exploring Midgar to share more with you about tempting secrets and battles.

So, all in all, FFVII Remake Intergrade is a pretty straight forward adaptation to the new gen. More a noticeable step than a giant leap, we're left wanting for more new elements and for the devs to put the DualSense to full use. But at least the 60 fps smoothness and the graphical fixes and enhancements make this the best version of the game so far.

Join us as we jump into the shoes of Yuffie in this standalone adventure for PS5 consoles.

Unfortunately, her content won't be available to players on PS4.

Final Fantasy VII: Remake to get PS5 version on June 10

The PS4 exclusive is finally heading to the new-gen console. 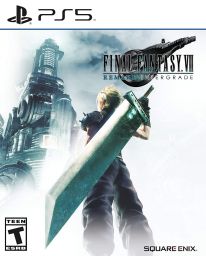