In our opinion FIFA has been on a downward spiral for a few years now, with some additions that instead of improving the game actually made it worse, but this year there's finally a turning point, even if small. FIFA 22 is better than FIFA 21, and this is true not only on the new generation of consoles, but also on the previous generation and on the PC. That said, many of FIFA's gameplay issues remain, and many of this year's new features are mostly superficial.

The big news this year is the HyperMotion technology, which is only available on the PS5, Xbox Series X|S, and Stadia versions. This apparently affects a number of elements, from AI behaviour to ball physics, but where we noticed the biggest difference was in the animations. Both versions of FIFA 22 include new animations, but the next-gen versions allow for a whole new kind of aerial gameplay. You can perform more passes, shots, and moves with the ball in the air, including light touches with the head, chest, and even the knee. Air duels have also been improved, and there are many new animations for heading - crosses are also better.

Overall FIFA 22 offers more balanced gameplay than FIFA 21, with several finer-tuned elements, but some disappointing issues remain. Defending is still a nightmare, and the artificial intelligence is the main culprit for it. There is a tremendous imbalance in the way the AI ​​- both the opponent's and ours - behaves on the field. When the AI is attacking it tends to go way too up the field, opening up huge spaces in the back for potential counterattacks, which remain the easiest way to score goals. The opposing AI has such an unbalanced behaviour, pressing with great carelessness, that if the player manages to score a goal (forcing the opponent to open even more) it is likely that he will be able to score 3 or 4 more goals simply on the counterattack, even against top teams.

On the other hand, when defending the team tends to retreat too much, and at times it seems that our defence is practically on top of the goal line - and this with high pressure indicators and a high defensive line in tactics. This, combined with an excessive use of dribbling, and soft marking done by our defending AI, allows the opponent to easily breach the area and even trade the ball there. All this results in a style of gameplay in which goals seem almost inevitable, and end up being more of a consequence of a poorly positioned artificial intelligence than exactly the player's actions.

Another problem we have with FIFA 22's gameplay is related to some highly unrealistic player moves. It's nothing new - in fact it's a problem that has persisted for several years - but even HyperMotion doesn't solve it. We're talking, for example, about how players can turn with the ball almost instantaneously, which makes their movement highly unpredictable, and physical duels are actually really poor, specially when one player is protecting the ball with L2/LT and another is pressing. Sometimes it seems almost impossible to take the ball away from a player protecting it, even with two players trying to steal it, as the ball goes through the players' legs (we don't mean a nutmeg, we mean it literally goes through the leg, like a graphic glitch). It is disappointing that these problems persist after all these years.

As for the goalkeepers, they are overall better, and some of the new animations are fantastic. However, we've also seen a few anecdotal mistakes that resulted in opposing goals, from the goalkeeper shoving the ball into his own goal, to literally dodging the ball in an absurd move. Fortunately these seem like rare occurrences, and most of the time keepers have a more positive behaviour than in FIFA 21.

Despite all the problems, FIFA 22 offers an overall very positive gameplay experience. It is possible to play some great football here, and also highly competitive and interesting games, including online. However, it seems there's just too many things crammed on top of each other. Lots of animations, AI behaviours, skill moves, and actions, and that's creating problems. We know it's practically impossible for this to happen, but we believe FIFA would benefit from a soft reboot in the new generation, with more solid foundations, just like Konami did with eFootball (it remains to be seen if the new PES will present the desired results, but at least it's trying something new).

As for the rest of the game, it's very similar to what we've already seen in FIFA 21. The new generation has a new intro episode that lasts around 30 minutes (you can see it in the video below), it's now possible to create a club in career mode, and there's a lot of new options to customise stadiums in several game modes. Content wise FIFA 22 remains a tremendous pack, from Volta to Ultimate Team mode, or from Career to Pro Clubs - all presented in great production values. That said, the new features are mostly superficial, without really affecting the bulk of the gaming experience.

FIFA 22 is better than FIFA 21, but not much better, and several of the usual problems persist. You'll be able to have fun with the game, and it's possible to play great football with FIFA 22, but we remain disappointed with what FIFA has shown these past few editions. Last year we ended the FIFA 21 review with the following: "maybe EA should take advantage of the generational leap to start over and improve the fundamentals of their football game." Well, our thoughts are exactly the same for FIFA 22, despite some improvements.

HQ
Gamereactor UK
+
New animations are great. Addition of club creation and new stadium options are very welcome. As always, it's bursting with content and presentation is top notch.
-
Artificial intelligence remains too fickle. Some highly unrealistic moves persist. New features are mostly superficial.
is our network score. What's yours? The network score is the average of every country's score

It's seeming even more likely that the next iteration of the franchise will look a little different.

He joins Tom and coach Zelonius in the team's new FIFA division.

Its boxed sales are down 35% year-on-year, however.

The scene will conclude with three postseason events in the Summer of 2022.

FIFA 22's soundtrack has been revealed

It includes artists such as Glass Animals, CHVRCHES, and Swedish House Mafia. 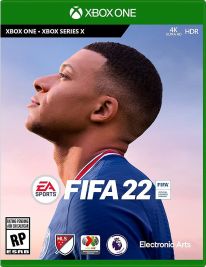