I would like to start this review by telling you a story about a friend of mine. I first met him in 1996. Or maybe it was in 1997. I can't remember exactly, but it is not that important. We spent many hours in each other's company during those first few years, and 1998 and 2000 were especially memorable. Then followed a number of years where we didn't see much of each other, and where different, more adventurous friends suddenly became part of my everyday life instead.

However, my friend and I found renewed interest in each other in the latter half of the last decade, and suddenly I remembered why I was so fond of being in his company in the first place. He had so much to offer when it came to keeping me entertained, and it didn't matter whether the sun was shining or if it was pouring down outside.

And he's been good at constantly coming up with new ideas, so I'm not going to get easily bored in his company. Even if we always do exactly the same thing every time we're together. I am pleased to announce that this year is no exception. This year my old friend FIFA is just as fun to be with as I had been hoping for.

Yes, we are here again. The time of year when the big sports games, as various seasons start around the world, begin hitting the market with promises of new initiatives set to feature in their respective franchises.

The biggest sports game of them all is probably where people are most expectant each year. With such a large fan base, it is a near-impossible task for EA to satisfy all FIFA fans, but they should certainly be commended for making a wholehearted attempt. We were, in advance, promised new features in the form of, among others: the First Touch system, changes in the Player Impact engine, the addition of tactical free kicks and, not least, new game types and changes to existing ones.

If you start a career, there's now several newly added features. For example, in the transfer system, the computer-controlled managers are now more likely to hold onto a player you're interested in, and instead of just rejecting a bid, they will often come back with a counter-offer. One could also make a bid consisting of a sum of money plus a player from your squad, which compares well to how real transfers are sometimes conducted. It does come with a little more depth and realism in the negotiations, and although it makes the game a decidedly managerial one, it's a welcome change that provides those more inclined to spend time on transfers with some added depth.

Another nice new addition to the career mode allows you to now also become the coach of your national team, on top of your managerial duties at your own club. Though this mode is only available once you've proven your worth over a long period of time.

A new feature called EA Sports Football Club Match Day is now also available. Here you will be able to read news and results from the real-world big leagues, and you will be able to play this week's matches, taking into account the team's form and results so far in the season. The hope is that it will create a closer bond between games and reality than has existed before, and EA seems to bet big on keeping everything updated, making it as attractive as possible.

The for me the most entertaining new addition has been the Creative Challenges. Here, one takes to the training ground and tries to clear three different challenges across virtually all of the technical categories, which among other things involves shots, passes along the ground, ball, posts, penalty kicks, dribbles, and so on. Once you've cleared the first three challenges, bronze, silver, and gold, you can test your abilities with the Super Challenge, where the maximum points ranks in the world class category. We're talking about a proper challenge.

Once you've completed the Super Challenge you unlock a Legendary Challenge, that sadly has me beat. It doesn't take more than 1-2 hours to pass the initial three levels of all challenges, but it entertains throughout. As an added bonus it's a great way of honing your skills, whereas things tend to get a bit tedious in standard practice modes, here EA has struck a chord with their new approach.

Taking the matches online brings us to the well-known FIFA Seasons, which among other initiatives has received a trophy cabinet, so you can really enjoy your victories, if you're into this sort of thing. Additionally, it will now be possible to play all seasons in Be a Pro (where you play eleven against eleven), and it will now be possible, among other things, to play for promotion and relegation.

However, it was difficult to test this type of game in its full form, as there have rarely been more than 2-3 players online here prior to release, but it is clearly an improvement that you can now play this mode over time. Mainly, one can say that EA is trying to spread online games into more areas than just 1v1 or tournaments, and are now really encouraging players to engage in some of the new initiatives.

Gameplay wise there has also been some small, but very noticeable changes.

First Touch has been overhauled, so all players no longer tame a ball as if they had flypaper on their boots. There are now several factors that come into play when the ball is controlled, including the pass quality, pressure from the opponent and the player's technical ability. It creates some far more realistic game situations, and it requires time to really consider the construction of each attack in order to achieve the best possible result.

This combined with the refined Player Impact Engine results in some more intense matches where variation is the key word. A computer-controlled defender will now better use his physique to stop an attack, and this can happen when the ball is near. An aggressive race will quickly be blocked off, so if you're the attacking team you have to change your battle plan to reach those vital scoring opportunities.

Tactical free kicks are also an element that many players have long been asking for, and now it's finally part of the package. It is undoubtedly a feature that will work best when playing with one or more friends off or online. Here you will be able to make players in the wall move in response to having two attacking players standing over the ball before the kick is taken. It's a fun little gimmick, but that's about it.

Although FIFA 13 is a seriously good game, so there are still a few blades of half rotten grass in the otherwise beautifully landscaped turf. The new First Touch system can sometimes be a bit frustrating. Taking into account that we often play with some of the world's best footballers, there is sometimes a little too much trapping that does not go quite according to plan. This happens even if delivery has been fairly accurate, and when you've been careful to pass the ball to a player who is not under pressure. However, it is probably a matter of getting used to it, because already after a few hours of play, more and more passing succeeds and we're controlling play, but it still happens that the ball sometimes makes a strange leap away the receiving player.

Another criticism is, once again, menus. Maybe it's just me that is easy to confuse, but I do not understand why the career menu, for example, should be as messy to look at when the main menu is fairly clear. Whether it is because there are too many features embedded, I could not say, but it must be possible to construct a more simple system. It is without doubt improved over the past few years, but it's still not quite optimal.

Graphics have seen a little progress, but it's probably been more the rule than the exception, that each year a few more details will be added to the individual players, and the animations are a little more vivid. Animations have benefited from the development of the Player Impact engine, which now sees the players fight each other to get the best positions in the box, while the computer controlled defenders block off players, so attackers must bend or stagger their runs in order to arrive on the end of passes.

I'm trying desperately to find some more criticism, but it's hard when you are constantly finding cool features in each of the game types, or seeing delicious gameplay-related details in the matches. FIFA 13 manages to really keep my interest with the new features, and I always wanted to play just a little longer so as to master a certain type of pass, a dribble or simply to repeat the ridiculously well-executed bicycle-kick I scored with Benzema in an earlier match.

EA has once again outdone itself and provides perhaps the best football game ever, and if FIFA 12 broke all sales records for a sports game, I can't see why FIFA 13 won't go on and do the same this year.

I have once again been bitten by the virtual football bug, and I'm ready to throw myself into the next game. My friend is back, and he is in the shape of his life. 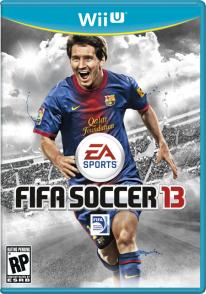