Electronic Arts has announced FIFA 13 and Madden NFL 13 (more on that later today) are both in development for Nintendo's upcoming console, the Wii U.

"We challenged our teams to develop innovations designed specifically for the Wii U, and to create new ways to play that would bring players of all abilities together," said Andrew Wilson, Head of EA Sports.

"Our teams have truly delivered creative new football experiences with FIFA 13 and Madden NFL 13 for the Wii U."

FIFA 13 will have some unique features on the Wii U. Groups can play together in co-op mode, where one person manages the team and up to four can play at the same time. Team Management Control gives access to an interactive radar, allowing managers to send players on supporting runs. The GamePad will was also offer touch screen controls for tactical changes and substitutions.

In Manage Match you'll be able to watch on from the sidelines, as players run up and down the pitch. You can get stats on any player, allowing for informed decision making as you seek to outmanoeuvre your opponents.

The GamePad will also feature in other ways. We'll be able to look through the touch screen to aim during set pieces and penalties, adding curve and power as desired. Also, shaking the GamePad will also activate Touch Screen Shooting, which EA reckons will remove the "hit and hope" side of taking freekicks.

EA has released a plethora of screens for the Wii U version of their world-beating football game. Those above are just general screens that show off players taking shots and making tackles, but those below show off the Wii U specific content and are therefore much more interesting.

The first two images show off some menus, not earth shattering stuff, but those who play will know just how long is spent staring at those screens. The other pictures show the Wii U's GamePad and give some idea of how it will be integrated into gameplay. 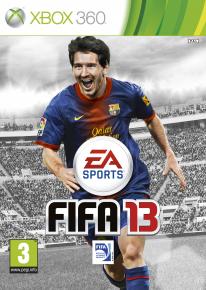