At Sony's PSVR event in London we got the chance to play Impulse Gear's VR shooter Farpoint which uses the PlayStation VR Aim Controller that Sony announced back in June, tasking you with destroying creepy crawlies on a Mars-esque planet.

When the VR kicks in and you see yourself holding the gun, translating your movements using the Aim Controller, you quickly realise that this is something very well suited to VR. First Person is very often associated with First Person Shooters and that's for a reason - it just works. It works just as well here, then, and anyone who has ever played paintball or laser tag or even held a toy gun will tell you there's a certain thrill about it, and Farpoint provides that perfectly.

What's more impressive is that it is executed amazingly well. The trigger assigned to shoot and the movement of the gun with the Aim Controller was all very straightforward, but added extras like the very impressive ability to use the holographic sight (we found ourselves even closing one eye to aim) and the easy swapping of weapons turned this from a good to a great VR shooting experience.

The visuals only made this even better. When we equipped the shotgun we had to stop for a second and turn the gun in our hand as it suddenly dawned on us how amazing everything looked. From our spacesuit gloves and our sleeves to the markings and the metallic effects on the gun the game was seriously impressive. The facial mapping on the humans in the game were equally good as well and everything had noticeable detail and effort put into it.

In terms of controls, shooting works fantastically and makes the player immediately feel like a supersoldier from the start, but movement is a little different. Movement consists of going forwards and without a right stick to change which way you are facing this means you are on a rail more-or-less moving slightly left and right. This is especially clear when jumping enemies miss you and are forced to run back into the direction you are facing in order to allow you to shoot them. To top this off, we were standing playing the game and sometimes felt uneasy on our feet when moving as it throws you off when you aren't comfortably seated with a solid base to support you.

Storywise there wasn't much to go on. There was a voice saying that simulations were being carried out and a simulation of two other people emerged during the demo, but none of this gave away huge details of the narrative that is clearly planned. These would imply that your task is to explore the history of missing people and deal with a threat or something along those lines, though.

The world isn't anything to write home about either. This Mars-like planet is a lot like Mars in the sense that it's orange, rocky and there's not a lot in the featureless expanse to marvel at. This is early days, though, and there may be more than just orange rock in the final product, and even if there isn't we anticipate there will be enough hostile spider aliens to distract you since we saw plenty of those in just a short demo.

Farpoint's demonstration was more about showing off the shooting mechanics, though, and it does an immaculate job of doing just that. The shooting is extremely well done and shows how VR First Person Shooters can work in principle. It's incredibly fun to gun down aliens aiming down the holographic sight or with a shotgun and a grenade launcher, but the game needs to do far more with the world and story (which we have no doubt they will do) to ensure its longevity upon release. For now though we can't wait to get back in our spacesuits with a laser rifle in our hands.

"A good story, great visuals, and enough variety when it comes to both weapons and enemies."

Up next on PSVR - Hands-on with Farpoint and more

With the launch of PlayStation VR well behind us, we got the chance to sample the next batch of virtual reality games and experiences coming to PS4.

Farpoint has its release date

PlayStation VR's answer to Starship Troopers to launch in May.

We sampled a VR shooter that is executed incredibly well.

We talk to Impulse Gear about Farpoint and the Aim Controller

We talk to the developer about the hard work involved with making an FPS work in VR.

Made specifically for the newly announced Farpoint. 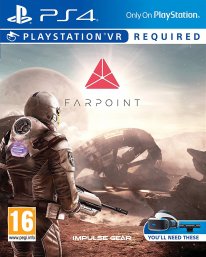