Towards the end of the last console generation, something that we saw a great deal more of was cross-platform multiplayer. Popular games like Rocket League and Overwatch completely removed the barriers of who you're allowed to play with and this enabled for a much stronger pool of players overall. One of the latest titles that has announced that it will be supporting cross-platform multiplayer is Farming Simulator 22. When it launches on November 22, virtual farmers on PC, PS4, PS5, Xbox One, and Xbox Series will be united together.

"The successful implementation of crossplay marks a major advancement for the multiplayer experience in the now self-published Farming Simulator series", comments Boris Stefan, Head of Publishing at GIANTS Software. "With the series becoming more and more popular around the world, and the fan base growing on PC and consoles alike, we can now connect virtual farmers without restrictions. Cooperative farming evolves!

Additionally, it was revealed that Farming Simulator 22 will feature a broader suite of customisation options to enable each virtual farmer to feel unique. This includes new player models, hairstyles, clothing items, and accessories. Some of the clothing items here are from recognisable brands such as Case IH, CLAAS, Fendt, and John Deere.

Senior Character Artist Roman Pelypenko said: "Since Farming Simulator is enjoyed by an innumerable amount of fans in multiplayer mode, whether among friends in relaxing sessions after work, or even our passionate content creators playing together in role-play scenarios, we're excited to provide them with many new possibilities for their characters."

The virtual farming community is about to feel bigger than before.

The new trailer showcases new machines and tools coming to the game.

These real-world events will take place in Bavaria, Germany.

Farming Simulator 22 to launch in November

We got a new cinematic trailer, and we can expect some new crops as well when it drops later this year.

Farming Simulator 22 is getting a Collector's Edition

It includes a USB beacon light and a disc filled with modding tutorials.

Two new maps and a new seasonal cycle will make their debut within this latest entry. 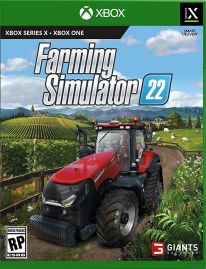